The US Air Force (USAF) has named “Rocket Cargo” as its fourth “Vanguard” programme, meaning the concept is a top science and technology development priority for the service.

The Air Force Research Laboratory (AFRL) will advance the technology, studying the viability of using large commercial rockets to deliver US Department of Defense (DoD) cargo anywhere in the world – in 90min or less, it says on 4 June. Recent advancements in large, reusable commercial rockets have made the concept seem feasible, the laboratory says. 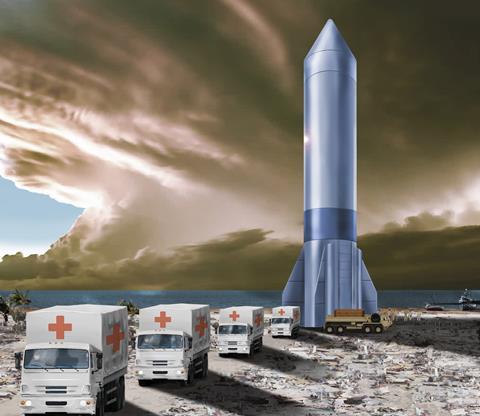 It wants to piggyback on commercial rocket cargo efforts via “service leases”, but declines to name potential commercial partners. However, SpaceX offers reusable rockets that might be retrofit candidates. Blue Origin is also developing reusable rockets.

“This includes the ability to land a rocket on a wide range of non-traditional materials and surfaces, including at remote sites,” the laboratory says. “In addition, AFRL scientists and engineers will research the ability to safely land a rocket near personnel and structures, engineer a rocket cargo bay and logistics for rapid loading and unloading, and air drop cargo from the rocket after re-entry in order to service locations where a rocket or aircraft cannot possibly land.”

Delivering cargo via rocket is not a new idea, says Greg Spanjers, AFRL Rocket Cargo programme manager. In the past, rockets’ high cost and small payloads have made the concept impractical.

But the development of large, reusable commercial rockets that return to, and land on, Earth has made the concept worth considering, Spanjers says.

In particular, SpaceX has brought down the cost of space launches by using reusable rockets. Most recently, the company test launched its Starship rocket to 32,800ft in altitude before re-landing the spacecraft on Earth. That rocket can carry a 100,000kg (220,000lb) payload to Earth orbit, SpaceX says.

The AFRL is eyeing rockets capable of carrying a payload of between 30,000kg to 100,000kg – a bit more than a Boeing C-17 strategic transport, which can carry a 77,500kg payloads, Spanjers says. 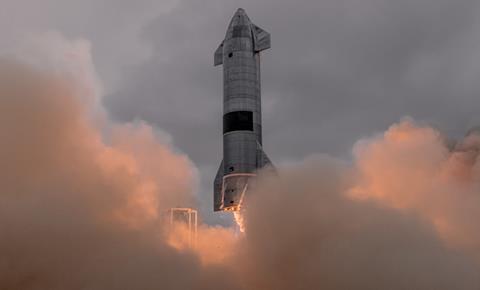 The Rocket Cargo programme aims to benefit from NASA’s Human Landing System programme, says Spanjers. That programme awarded SpaceX a contract, worth up to $2.89 billion, in April to land US astronauts on the surface of the moon using a version of its Starship. Spanjers says he sees potential in rocket technology proposed by all three bidders on that programme. In addition to contract winner SpaceX, moon landing system bids were received from Blue Origin and Dynetics.

“These rockets have to have the capability to do an austere landing and unload the cargo,” he says. “If they can land in those places, we’re interested in knowing to what extent we can extend that to a larger range of terrain so that we can do immediate cargo transports to basically anywhere on the planet.”

While reusable booster rockets and moon landers have similar missions to point-to-point rocket hops across earth, the AFRL says its particular mission will require additional technology development. For example, the laboratory’s Aerospace Systems Directorate is exploring rapid weather characterisation, in order to clear rockets for rapid launch. It is also looking at new rocket trajectories and windtunnel testing.

“Material scientists in the AFRL Materials and Manufacturing Directorate will help research the feasibility of landing the rocket on non-traditional surfaces such as naval platforms or even in austere locations for disaster relief,” the laboratory says. “The AFRL Airman Systems Directorate will explore human factors, such as potential toxicity issues and clouds of dust when rocket plumes impinge on those non-traditional materials, and also characterising the plume environments to assess whether we can use the rocket near populated areas.”

Even basic loading and unloading could be a major challenge. The AFRL is researching ways to quickly load and unload cargo from a rocket more than a 30.5m (100ft) tall, potentially in areas with limited ground equipment, such as during disaster relief operations, it says. Generally, the USAF aims to lean on commercial launch and landing sites, which will likely have dedicated ground equipment, however.

The AFRL also aims to integrate standard Pentagon cargo into a rocket payload fairing with minimal changes to its logistics system.

“For cargo accommodation we are focused on smartly integrating DoD-standard intermodal containers onto commercial rockets, so as to allow transfer between different shipping modes without slowing down to repackage,” says the laboratory. “If the Vanguard is successful, we can expect DoD will be interested in shipping everything that we transport by air today, which could certainly include volatile material such as fuel and munitions resupply.”

No volatile material will be carried by a rocket under the Vanguard science and technology development effort. “However, we will perform analysis to determine the compatibility of volatile materials with the rocket launch environment,” the AFRL says.

Ultimately, the USAF has designated Rocket Cargo as a Vanguard initiative because it sees it as “game-changing”.

The service’s Vanguard initiatives are characterised as efforts aimed at developing advanced technologies by 2030 to gain advantage over near-peer adversaries, such as China and Russia. The three other Vanguard programmes include Skyborg, an autonomous flight and mission control system for low-cost, “attritable” unmanned air vehicles; NTS-3, an experimental satellite navigation system that could be a GPS alternative; and Golden Horde, an autonomous networked weapon system.

The relatively new US Space Force is leading the Rocket Cargo effort. The Space and Missile Systems Center will serve as the programme executive officer.

Article updated on 4 June with additional comments from AFRL