US Navy looks to add JPALS to CMV-22B Osprey

The US Navy (USN) is working toward adding Raytheon’s Joint Precision Approach and Landing System (JPALS) to its Bell Boeing CMV-22B Osprey.

Raytheon expects a request for information, followed by a request for proposal, for the capability in the near term, CJ Jaynes, the company’s executive technical adviser for JPALS, said on 2 August. The CMV-22B tiltrotor operates from the deck of the USN’s nuclear-powered aircraft carriers, a ship in which JPALS is already integrated. 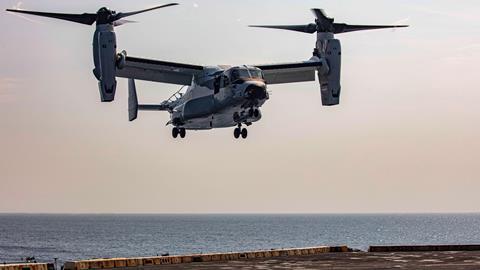 Raytheon claims JPALS can precisely guide aircraft onto the decks of carriers and amphibious assault ships in all weather, including fog and heavy rain. The system uses an encrypted data link and differential GPS navigation to guide aircraft in for a precision landing. It can help aircraft land on ships that are pitching and rolling in rough water, up to Sea State 5 conditions, which includes 1.8m (6ft)-tall waves, the company says.

“The F/A-18 programme office has done a study with Boeing to put [JPALS] on the F/A-18E/F and the EA-18G,” adds Jaynes. “That is probably a couple more years down the road before they actually implement that.”

After integrating JPALS onto the USN’s CMV-22B, it ought to be relatively easy to add the capability to US Marine Corps (USMC) MV-22s and US Air Force CV-22s, she adds. The MV-22 operates from the top of amphibious assault ships, which already have JPALS installed and host the short take-off and vertical landing F-35B.

In addition to guiding aircraft onto aircraft carriers and amphibious assault ships, the services are interested in an expeditionary version of JPALS (eJPALS) that could be used to guide aircraft onto remote airstrips, for example, on distant islands. The Department of Defense wants to be able to spread out its forces across the Pacific Ocean to avoid having large numbers of aircraft destroyed at once by a cruise or ballistic missile attack from China.

Toward that goal, the USMC invited Raytheon to show how the F-35B could use eJPALS as part of a three-week demonstration at MCAS Yuma in Arizona in June, says Jaynes. This was Raytheon’s second demonstration of eJPALS for the service, the first coming in 2019.

“In total, there were 50 combined straight-in and vertical landing approaches [with the F-35B] while the system continuously broadcast 10 hours per day, for more than 12 days,” says Raytheon.

The demonstrator version of eJPALS comes in several small transportable cases, weighing in total less than 454kg (1,000lb). As currently configured, the system takes a little less than 1.5h to set up. The final version of eJPALS ought to be able to guide aircraft onto 50 different touchdown points simultaneously in a 20nm (37km) radius, says Raytheon. For example, that might enable the USMC to place eJPALS on one island, while guiding in several F-35Bs onto airstrips on nearby islands, says Jaynes.