The US Air Force (USAF) finished a second, “more complex and rigorous field test” of its Advanced Battle Management System (ABMS) from 31 August to 3 September.

ABMS is a sort of military internet network being developed to link a vast array of aircraft, equipment and soldiers. The USAF aims to use the network to coordinate fast-moving joint operations with the US Space Force, US Navy, US Marine Corps and US Army. 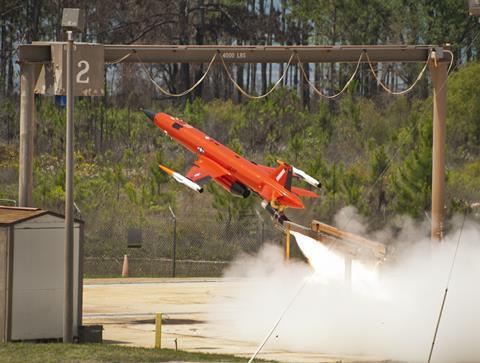 An example of the BQM-167 mock cruise missile, which was used for the latest AMBS test

As part of the most recent test, US military forces simulated using ABMS to “detect and defeat efforts to disrupt US operations in space”, says the USAF.

The forces also coordinated the shoot-down of a mock cruise missile – a BQM-167 traget drone – using a new “hypervelocity weapon”. Several media reports indicated that the weapon was a US Army M109 Paladin-based 155mm howitzer firing a precision guided-artillery shell that is part of BAE Systems’ in-development Hyper Velocity Gun Weapon System. The weapon system promises to be a cheaper way, compared to a Patriot surface-to-air missile battery, for instance, to shoot down incoming cruise missiles.

Spotting an incoming cruise missile and shooting it down requires several branches of the military to closely coordinate what they see and their plans of action. In theory, an incoming cruise missile could be spotted by a Boeing E-3 Sentry Airborne Warning and Control System aircraft or orbiting satellite, and then the weapon’s coordinates would have to be quickly passed to a nearby smart artillery or missile battery. The USAF says it wants to use ABMS to make “information available instantaneously across geographically-separated forces”.

“Future battlefields will be characterised by information saturation. One of the key objectives of this onramp was to present a dizzying array of information for participants to synthesise, just like they would see in a real operation,” says Will Roper, assistant secretary of the USAF for acquisition, technology and logistics. “This compelled commanders and operators to trust data analytics and artificial intelligence to understand the battle. Valuing data as an essential warfighting resource, one no less vital than jet fuel or satellites, is the key to next-gen warfare.”

The USAF says the latest field test for ABMS was a “significant advance in both size and ambition from the first, which was held in December [2019]”. The service notes that 70 teams from private industry and 65 teams from the US government took part. The test used 35 pieces of military equipment in 30 different locations, including Joint Base Andrews in Maryland, White Sands Missile Range in New Mexico, and Nellis AFB in Nevada.