​The US Air Force (USAF) released its final request for proposal (RFI) for about half a dozen Textron Aviation AT-6 and Sierra Nevada /Embraer A-29 light attack aircraft.

The US Air Force (USAF) released its final request for proposal (RFI) for about half a dozen Textron Aviation AT-6 and Sierra Nevada /Embraer A-29 light attack aircraft.

The RFI was issued on 24 October. The USAF plans to purchase two to three light attack aircraft from each manufacturer, the service says in a media release.

The light attack programme is intended to find aircraft that would boost US allies and foreign military partners’ ground attack capabilities, while also developing communications technology that would connect those aircraft with the USA’s robust intelligence, surveillance reconnaissance (ISR) network. 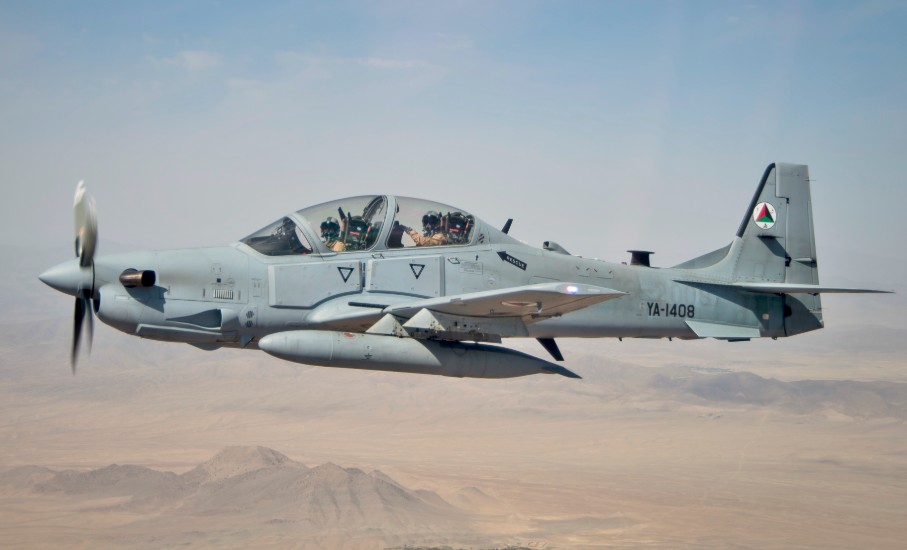 Embraer A-29 over Afghanistan

“Over the last two years, I watched as the Air Force experimented with light attack aircraft to discover alternate, cost-effective options to deliver airpower and build partner capacity around the globe,” says secretary of the USAF Barbara Barrett, who was confirmed this month. “I look forward to this next phase.”

The light attack experiment has evolved over the last several years. Its original intent was in part to find a cheap-to-fly aircraft for the USAF. The hope was that light attack aircraft would be low-cost alternatives for air-to-ground attack missions compared to using expensive aircraft such as the Lockheed Martin F-35 or Boeing F-15.

The service eventually shifted its focus towards developing communications networks for foreign countries’ light attack aircraft. Such communications hardware and software are to connect aircraft, ISR sensors and weapons of foreign military partners and allies to the US military.

“If I hear one thing from my international air chiefs, it’s ‘we need to figure out how to share information both ways,’” says General David L. Goldfein, the USAF’s chief of staff.

As part of the next phase of the light attack programme, AT-6 Wolverine aircraft will be used by Air Combat Command at Nellis AFB in Nevada, for continued testing and development of operational tactics and standards for new tactical communications and data-sharing networks, says the USAF. That technology is intended to be exported to US allies and foreign military partners.

The A-29 Super Tucano aircraft will be sent to Hurlburt Field in Florida, where they will be used by Air Force Special Operations Command to develop an instructor pilot programme for the command’s Combat Aviation Advisory mission, says the service. The programme is intended to help train foreign pilots in the use of light attack aircraft.

“Our focus is on how a light attack aircraft can help our allies and partners as they confront violent extremism and conduct operations within their borders,” says Goldfein. “Continuing this experiment, using the authorities Congress has provided, gives us the opportunity to put a small number of aircraft through the paces and work with partner nations on ways in which smaller, affordable aircraft like these can support their air forces.”

The USAF expects to issue a contract by the end of the year for A-29 aircraft and another contract in early 2020 for AT-6 aircraft.