The US Air Force Special Operations Command (AFSOC) plans to move away from some of the counter-terrorism and anti-insurgency missions that it assumed after the 11 September 2001 attacks, in favour of traditional niche roles in the USA’s budding great power competition with Russia and China.

“In the aftermath of 9/11, the Special Operations Forces kind of stepped out of the shadow and took on a central role in the counter [violent extremist organisations] operations that have defined what we’ve done for the last 19 years,” says Lieutenant General James Slife, commander of AFSOC. “But when we look forward to the future operating environment, we don’t see [Special Operations Forces] as a central supported role, but rather returning to our roots of providing niche specialised capabilities to the broader joint force.” 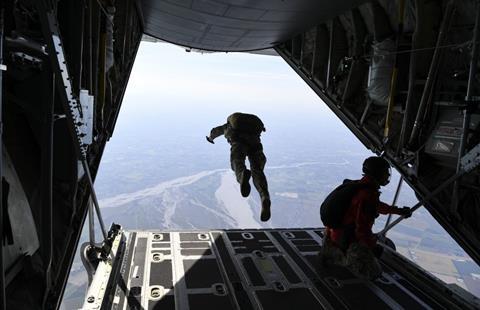 Slife says the force is looking to find ways to support the USAF’s Agile Combat Employment strategy, which aims to constantly move fighter aircraft between runways to avoid being hit by cruise or ballistic missiles while parked on the ground.

In particular, AFSOC is looking at increasing the practice its combat controllers have in directing those sorts of operations. Combat controllers are one-man AFSOC attachments to special operations teams that serve as air traffic controllers for incoming aircraft. The specialists often parachute behind enemy lines to set up landing zones for aerial assaults of paratroopers or soldiers carried by helicopters.

“We’re relearning how to operate off of highway landing strips and abandoned air strips,” Slife says. “Those types of things that allow us to rapidly rearm and refuel fighter-type aircraft from austere regions.”

For years, the USAF has practiced the ability to land several Lockheed Martin F-22 Raptors on an austere air strip and refuel and rearm them from a Boeing C-17 Globemaster III strategic transport. Slife says AFSOC would support similar missions.