If all goes smoothly, the US Air Force will sign a contract in late 2010 to buy 179 operational tankers over the next 13 years, replacing part of a Boeing KC-135 fleet that entered service from 1956.

Of course, the decade-long experience with the KC-X contracting process suggests the aforementioned 'if' is a significant operative. Three attempts to buy new tankers since 2001 have so far yielded only jail terms, political tension and contractual failure.

Political intrusion remains a threat as Boeing and EADS North America prepare to submit bids ahead of a 9 July deadline.

But, among the risks the Department of Defense can directly control, none is more important for the outcome of KC-X than the success of a controversial and complex acquisition strategy adopted since last September to decide the winner of the fresh competition.

It's an approach that has already received sharp criticism. The new KC-X acquisition strategy moved Northrop Grumman to withdraw as prime contractor to former partner EADS on 8 March, with company executives complaining about unfair selection criteria and unwise contracting terms.

The DoD did not heed calls by EADS to modify the evaluation criteria - although it did extend the deadline for submitting proposals by two months. But Gallois' subordinates at EADS NA decided on 20 April to compete anyway.

"We intend to win," said EADS NA chief executive Sean O'Keefe. "We believe this will be judged on the merits and on the criteria the DoD has laid out."

But the outcome of KC-X could influence more than the evaluation of the Boeing KC-767 NewGen Tanker against the Airbus A330-200-derived EADS NA KC-45.

When the DoD unveiled the criteria for the second competition last September, its objective was not merely for the KC-X contract award to survive a potential protest by the losing bidder.

The past decade has been filled by costly blunders for weapons acquisition. With KC-X, a new DoD regime hopes to set the template by which multi-billion acquisition deals for advanced weapon systems should be done.

The pending deals bear similarities to the KC-X process, as repeats of previous acquisition failures, and are also likely to involve derivatives of existing aircraft.

Among the military's needs to buy new aircraft, however, none are more expensive or sensitive than the potentially $35 billion tanker contract. At the end of the day, the evaluation will be judged not by whether it passes a protest challenge, or is upheld by lawmakers who control the funding.

The true test will be whether the evaluation can select the aircraft that best meets the air force's requirements - but for the right price.

According to Northrop, the ideal aircraft under the selection criteria for KC-X is not in the competition. In fact, the air force is already flying it. "If you were able to build a new KC-135 today, technically, it would win the competition," Mitchell Waldman, Northrop's vice president of business development, said last October.

The solicitation issued in February - but revealed in draft form last September - bases the fuel offload requirement for the KC-X tanker on the maximum capacity of the KC-135R.

In the previous competition, the Boeing KC-767AT offered the capability to deliver about 54,400kg of fuel at that distance.

Northrop's larger KC-30 (later rebranded as the KC-45) proposed delivering 69,400kg under the same parameters. The KC-45's extra fuel capacity seemed to be the single most important factor in the air force's analysis. "I know the team looked at a whole number of things," former Gen Artur Lichte, then chief of Air Mobility Command, said on 29 February. "But from my perspective, I can sum [the KC-45 decision] up in one word: more. More passengers, more cargo, more fuel to offload, more patients that we can carry, more availability, more flexibility and more dependability."

But the DoD has changed the rules for the re-competition, giving no advantage in its evaluation to any of the qualities previously identified by Lichte.

Instead, the solicitation requires the bidders to meet 372 mandatory requirements. The proposal that passes each requirement at the lowest price - which is adjusted to account for base construction costs, fuel efficiency and analysed mission effectiveness - wins the contract.

But the DoD also inserted an important caveat. The air force prefers to pay for the minimum performance at the lowest price. However, if the adjusted price of the two proposals falls within 1%, the air force will consider 93 non-mandatory specifications.

It is possible to earn up to 103 bonus points for exceeding the minimum requirement. The bonus criteria includes awarding up to 10 points for a tanker than provides at least 66,700kg of fuel offload at 1,000nm; a metric promised by Northrop's team in the previous competition.

It remains unclear what performance Boeing will promise in this competition, but it could have collected six bonus points with its previous offering under the new rules.

Essentially, that means the air force's new criteria rewards the KC-45's seemingly greatest advantage - size - with potentially less than 4% of the achievable bonus points, but only if the non-mandatory requirements are even scored.

The set-up appears to favour Boeing's smaller aircraft, but only if the manufacturer can beat EADS on price.

"Northrop had a point about this process resulting in a price shootout," says Richard Aboulafia, vice president for analysis at the Teal Group.

Such an outcome appears to favour a Boeing bid, as in theory, a smaller aircraft is cheaper to build and less expensive to operate and maintain. 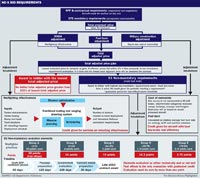 However, some analysts think EADS can literally give Boeing a run for its money under the new evaluation criteria.

"I think EADS may have more of a shot at it than people think," says Michel Merluzeau, managing partner at Seattle-based G2 Solutions. "If they can demonstrate they meet the requirements then it becomes a price shoot-out."

The KC-45's apparent disadvantage on manufacturing cost, as compared to the KC-767, may not be accurate, Merluzeau says.

Significantly, Northrop and Boeing submitted offers in the previous competition that came within fractions of matching each other on price.

Since that time, two things have changed in EADS's favour, Merluzeau says. Northrop's departure means EADS can scratch the margin claimed by the former prime contractor, which has been estimated at between 10% and 15%. Meanwhile, the predicted softening of the Euro's value in relation to the US dollar also may allow EADS to price more aggressively in the new competition.

"The answer really boils down to one of price," says Ralph Crosby, chairman of EADS NA. "Our risk is small because our development is advanced. This implies that our price for the [system development and demonstration] part of the contract may be lower.

"Our competitor hasn't fully defined their airplane, let alone started to build it. Their price will be a determinate of what they offer."

Crosby notes that "the risk part of the equation has been assigned to the contractor. The tanker for Australia is virtually identical to what we will offer the air force. Based on all data and evidence I have seen, we have a lot less distance to go than our competitor."

In the original competition, the air force's long list of non-mandatory "requirements" is remembered as one of key reasons the competition was poorly managed. The sheer number of non-mandatory specifications seemed extraordinary. Of 808 separate needs specified in the request for proposals, more than 770 were labelled non-mandatory. Reviewing the air force's performance after the US Government Accountability Office sustained Boeing's protest into the KC-45's selection in 2008, the DoD interpreted such a lopsided ratio as one of the signs the competition was mishandled.

In the second go-round, DoD officials took care to correct the imbalance, chopping the list of non-mandatory specifications from more than 770 to 93.

Keeping that number low is sought not only to reduce the chances of a successful protest by a losing bidder.

Cracking down on ambiguous specifications that can lead to costly contract changes later is a major tenet of the ongoing acquisition reform movement.

Deputy Secretary of Defense William Lynn raised that point on 25 February, as he unveiled the final draft of the RFP for the second competition.

"One of the ways you get cost growth is that you add requirements as you go through the programme, and you implement them through engineering change proposals and you increase the price," Lynn said. "That is exactly what would have happened, had the prior competition gone forward to contract."

Of course, the GAO prevented the prior competition from advancing. The air force's mishandling of its 770 non-mandatory requirements was cited as one of eight reasons for overturning the contract award to the Northrop-led team.

Specifically, the GAO's auditors found that the air force had failed to credit Boeing for offering to meet more non-mandatory specifications than Northrop, despite language in the solicitation that asked bidders to satisfy as many as possible.

"Clarity and precision is a very important principle of the acquisition reform effort we have here," Ashton Carter, undersecretary of acquisition, technology and logistics, said on 25 February.

"And so the source selection strategy [for KC-X] is crystal clear," he adds. "We've said that from the beginning. Everybody will know, when a winner is picked, exactly why they won. And up front, both offerors know exactly what they need to do to win."

USAF UNIT OUTLINES CURRENT KC-135 USE
The US Air Force's only permanent European-based tankers are the 15 Boeing KC-135s assigned to its 100th Air Refuelling Wing (ARW) at RAF Mildenhall in Suffolk, England.

Totalling around 75 pilots and 30 boom operators, or "boomers", the unit provides support for regionally based assets, including Lockheed Martin MC-130H/P combat tankers from Mildenhall, Boeing F-15s from nearby RAF Lakenheath and Lockheed F-16s from Spangdahlem AFB, Germany.

Its assets are also called upon to refuel USAF types transiting European airspace en route to Afghanistan and Iraq, and to provide support for fighters from other NATO and Partnership for Peace nations.

The 100th ARW has flown the KC-135 since 1970, and its aircraft are now in the Block 40.4 avionics configuration. This features a Rockwell Collins Pacer Crag cockpit and global air traffic management capability.

Col Creg Paulk, commander of the 100th ARW, says he cannot remember one of the unit's aircraft being flown at its maximum fuel load. "Fighters regularly only take about 70% of the fuel that they've asked for, so we have to plan for inefficiencies."

The wing logged around 6,600 flight hours in 2009, and Paulk says each of his aircraft has typically amassed only 20,000h, despite being an average of 49 years old.

"They are ageing aircraft, but it's more of a maintainer problem," he told IQPC's Air Tankers and Aerial Refuelling conference in London earlier this year. "We see them working a lot on corrosion and the skin, but the engines and avionics are not so much of a problem."