The US Army has already found a home for 119 of the 652 Bell OH-58 Kiowa and TH-67 Creek helicopters that have been displaced under the service’s aviation restructure initiative, according to a recent report provided to Congress.

Of those airframes, 60 TH-67s are being loaned to US Department of Justice to support its operations in Colombia through US Southern Command. Another 20 of the FAA-certified trainers are being moved internally to the Army’s combat training centre and five are moving to the Navy’s test pilot school.

The Army is keeping five Kiowas as prototype test aircraft and another 24 for parts reclamation. The remainder of the 119 aircraft are “pending attrition”, leaving a total of 307 OH-58Ds, 130 OH-58A/Cs and 96 TH-67s available for reuse or transfer as of 4 May – when the report was sent to lawmakers. An Army spokesman confirmed the details of the document 8 July. 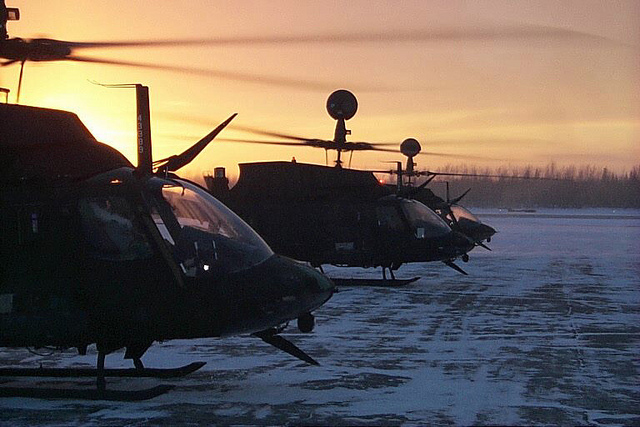 The aircraft are available due to the Army’s controversial aviation shake-up, which retires the OH-58 armed scout helicopter and replaces the TH-67 with the dual-engined Airbus UH-72 Lakota as a cost-cutting measure, expected to save $12 billion up front and a further $1 billion annually in avoided operating and support costs.

Transfer of the TH-67s, based on the Bell 206B-3 JetRanger, is expected to be fairly easy since the aircraft are FAA-certified and available to the civil aviation community.

Moving the OH-58 presents more of a challenge, since the aircraft are not civil-certified and can only be used domestically by government agencies for non-commercial purposes. Transferring the 307 D-models will be even more difficult, since the aircraft has a fully integrated surveillance and targeting system and is “incapable of safe flight operations following the removal or demilitarisation of equipment without significant engineering design change and modifications”.

Those aircraft can be sold internationally as combat helicopters through the US government’s foreign military sales process. Eight countries have expressed interest in buying the OH-58Ds and the forecast demand between 2015 and 2019 is for 41 aircraft, the report says.

The report also addresses concerns that flooding the market with excess defence stock will hurt manufacturers.

“The impact to the domestic rotary wing industrial base due to Army’s divestment of the OH-58 and TH-67 is assessed as low,” the report concludes, adding that only one of six manufacturers (that is not a defence supplier) could lose up to 9.8% of its annual revenue. “It does not represent a significant threat to the domestic rotary wing industrial base because the total revenue of the remaining five, which includes two DOD suppliers, is not significantly disrupted.”

To back up its assessment, the report notes that the forecast market demand for light, single-engine helicopters between 2015 and 2019 is 125 aircraft for law enforcement and government agencies and 3,258 for the civil market. The Army expects to displace 34% of demand among state and federal government agencies in that time period with the A- and C-model OH-58s and TH-67. The TH-67 could displace up to 2.9% of the civil market.

The aviation restructure, if fully implemented, would remove all Boeing AH-64 Apache attack helicopters from the reserve and national guard units and move them to the active force to fill the armed aerial scout role. In exchange, more than 100 Sikorsky UH-60 Black Hawks would go to the reserve force.

The move is opposed by the US National Guard Bureau and come in Congress, since removing the OH-58 and TH-67 from service is expected to eliminate 10,700 positions in the Army – according to the US Government Accountability Office.

The service is downsizing due to shrinking budgets and a reduced combat role since the height of the Afghanistan and Iraq wars. This week, it was reported that the Army’s active force will downsize to 450,000 personnel by budget year 2017.

(Photos and information sourced from US Army)