Central European budget carrier Wizz Air could further increase its Airbus A321neo commitment next year, having taken options and rights on a further 94 jets, on top of the 102 ordered as part of the Indigo Partners deal.

But it states that “under certain circumstances” the budget airline could obtain another 19 A321neos, while Airbus has also granted purchase rights on 75 more.

The airline will have the freedom to modify the agreement to switch to the smaller A320neo or the long-range A321XLR if required.

Wizz Air shareholders still have to approve the fleet order. 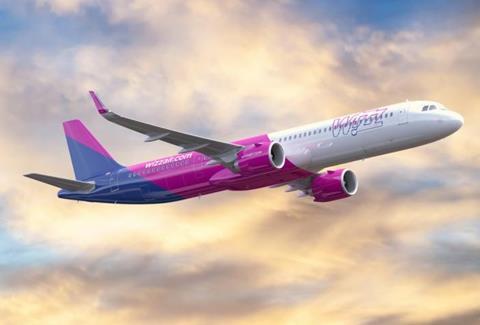 “Despite strong demand for the aircraft, we have signed very attractive terms with Airbus for the long-term supply of more aircraft until the end of the decade,” says Wizz Air chief Jozsef Varadi.

He says the airline will have an “unassailable position” regarding sustainability.

Indigo Partner carriers – which include Frontier Airlines, JetSmart and Volaris, alongside Wizz – have ordered a total of 1,145 Airbus single-aisle jets.

Managing partner Bill Franke says the 255-aircraft order unveiled at the Dubai air show will “raffirm” its carriers’ commitment to “consistent growth through the next decade”.