Production of Boeing’s AH-6 Little Bird light-attack helicopter has been at a virtual standstill for around 18 months, but increasing Foreign Military Sales interest has the company believing it can revive the programme with as many as 75 more orders.

Production of Boeing’s AH-6 Little Bird light-attack helicopter has been at a virtual standstill for around 18 months, but increasing Foreign Military Sales interest has the company believing it can revive the programme with as many as 75 more orders.

Growing international interest in the aircraft stems in part from the difficulties a “competitor” is facing to gain FMS certification to equip its helicopter with Hellfire missiles, says Terry Jamison, director of international vertical lift sales for Boeing. 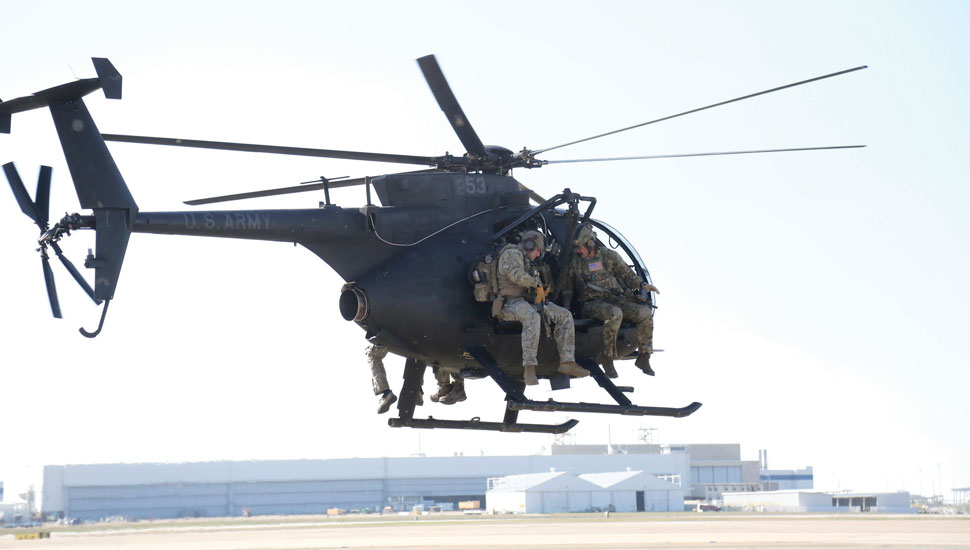 Jamison refuses to identify the company, but the closest US competitor to the AH-6 is MD Helicopters’ MD 530. Both light helicopters are based on the Hughes OH-6 Cayuse.

“We’re seeing a lot of those customers come back to us now because we do have the Hellfire anti-armour capability on that platform,” says Jamison. “And so that’s a light attack reconnaissance [helicopter] for a reduced cost than what the AH-64 provides.”

Jamison says he is at the show drumming up interest in the AH-6 from potential foreign military buyers.

The commonality between the glass cockpits of the AH-6 and AH-64 has also increased interest, he says.

“Some customers are looking at [the AH-6] as a stepping stone perhaps to an Apache,” says Jamison.

Other countries are interested in operating a mixed fleet of AH-6 and AH-64 rotorcraft to reduce costs by training pilots to fly both types, he says.

The Little Bird production line is positioned amid production of the AH-64 in Boeing’s Mesa, Arizona factory. Tooling and other equipment for the production line can be packed into four Conex shipping containers, says Jamison.

That could make trading offsets to foreign countries easier, he says.

“If a country wanted to do final assembly themselves, it would be a very easy platform to do that,” says Jamison.

It would likely take an order of at least 15 AH-6s to cost justify final assembly in another country, depending on the configuration, he adds.