The Engine Alliance joint venture is studying sweeping design changes for the GP7200 – up to a new centreline engine – in response to demands for better performance from top Airbus A380 customer Emirates.

“I wouldn’t take anything off the table,” Athans says.

An engineering team is developing a suite of options for review by the Engine Alliance partners next year, he says. The focus of the study is on improving the fuel efficiency of the GP7200.

One potential upgrade under review is a redesign of the blades of the compressor and turbine stages with the latest in 3D aerodynamic design tools, he says. 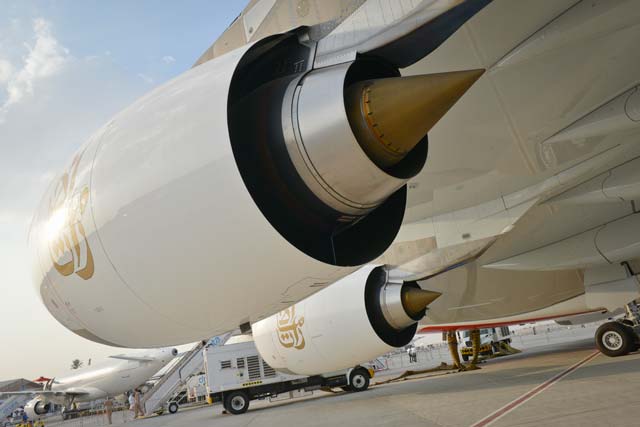 At a lower “incremental” level, the joint venture also would consider proposing a software change to optimise clearance control for the fan case, Athans says.

Developing an all-new centreline engine would require a business case that justifies an at least $1 billion certification programme, but the idea will be considered, he says.

The structure of the joint venture will not be affected if any design changes are approved, he says.

“It’s a very, very functional partnership,”Athans says. “Everything is just split right down the middle.”

The performance improvements are being considered as the Engine Alliance works to improve the reliability of the GP7200. An Emirates A380 powered by the GP7200 experienced an in-flight shutdown on 11 November 2012 over Australia. The malfunction was traced to inadequate cooling in the turbine blade.

The Engine Alliance plans to certificate in mid-2014 an upgraded cooling system for the turbine blade, shrouds and nozzles, Athans says.

Despite the in-flight shutdown, the GP7200 has compiled a dispatch rating of 99.9% after more than 2 million flight hours, he says.