DUBAI: Show debut for A-29 demonstrator

Embraer is giving a Duabi debut to its newly-built A-29 Super Tucano demonstrator aircraft, which will be on static display throughout the show. The company’s multi-mission KC-390 also looms large, after the first prototype resumed flight-testing after nine months of ground work.

Despite Brazil’s economic turmoil, Embraer is enjoying relative success with its fixed-wing A-29 light attack turoprop product and is pressing forward with KC-390 development and now anticipates entry into service for the Brazilian air force in mid-2018.

Super Tucano, for now, remains one of the company’s key export items, with 220 firm orders from 13 countries and 190 units delivered to date. Over the past two years, the company has added more than 20 weapon configurations, for a total of 150 flight-certificated stores and armaments. Embraer this year signed deals with Ghana, Mali and Senegal, and Geraldo Gomes, vice-president of international business development at its defence division, expects more deals to close this year.

“The configuration of the aircraft is focused on mission accomplishment,” says Gomes. “The most important systems on the aircraft are duplicated or triplicated to guarantee the pilot can comply with the mission and come back home safely.” 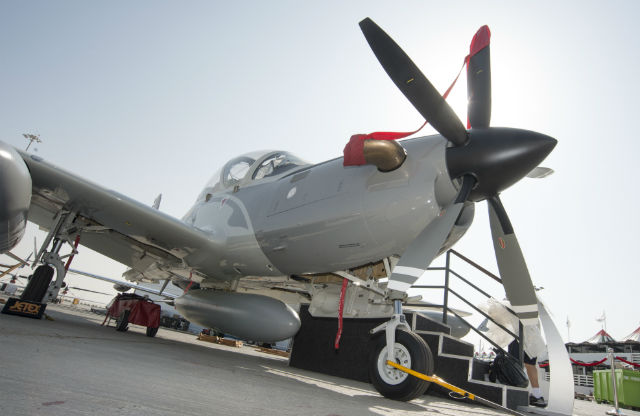 The A-29 (EMD 314) is favoured for patrol and counter-insurgency operations, and through Embraer’s integrated solutions business, the aircraft has been incorporated into Brazil’s expansive Amazon jungle monitoring and border surveillance system.

In the USA, Embraer and Sierra Nevada continue to deliver A-29s to the fledgling Afghan air force through a final assembly and checkout facility in Jacksonville, Florida. Embraer provides the aircraft and training devices under that arrangement and SNC provides logistics support and training for pilots and mechanics at Moody AFB in Georgia.

Gomes says 12 aircraft have been delivered through that line so far, and he foresees an enduring partnership with Sierra Nevada, both for the A-29 and other potential business opportunities. He expects continued, healthy Super Tucano production rates in Brazil and Jacksonville, and the US-based programme recently received six orders for Lebanon.

On the KC-390, programme vice-president Paulo Gastão Silva says a second flying prototype will join the 2,000h flight test campaign in early 2016, and one of the two test articles should soon begin making appearances at air shows like Dubai.

Gastão Silva expects robust market demand for International Aero Engines V2500-powered KC-390 over its primary turboprop competitor, the Lockheed Martin C-130J. He expects limited competition from the much larger Airbus Defence & Space A400M, and only in a handful of marketing campaigns. The company has partnered with Boeing for KC-390 marketing in the USA, the UK and the Middle East.

“We have a state-of-the-art design with new technology, and we are bringing all the experience we have on the commercial side,” he says. “Our big advantage is the new solution and higher capacity and much higher speed [compared to the C-130J] and much more availability. We’ve developed the aircraft to have the lowest life-cycle cost in the market. That’s very important to the customer.”

Brazil intends to procure 28 KC-390s to replace its C-130Es and KC-130Hs, and Embraer has letters of intent from five countries for another 32 aircraft. Flight certification activities will continue through early 2017, with mission system trials including aerial refuelling following shortly after.