With the arrival of the Netherlands’ two Lockheed Martin F-35As on 23 May, Dutch defence minister Jeanine Hennis-Plasschaert fulfilled her promise to show the nation the replacement for its ageing Lockheed Martin F-16s.

Having crossed the Atlantic from NAS Patuxent River in Maryland, escorted by two Royal Netherlands Air Force McDonnell Douglas KDC-10 tankers, the Lightning IIs are giving residents near Leeuwarden and Volkel air bases an insight into the difference in noise levels between the fighters.

Hennis-Plasschaert pledged to arrange “experience flights”, followed by a questionnaire for the public to rate the F-35 and F-16 while they performed identical patterns. The Netherlands Aerospace Centre (NLR) has also recorded the noise levels in various locations.

Following two series of flights, the air force has received data showing the maximum difference in noise level was limited to 3dB (A) – and people did not rate this as significantly worse. They did, however, notice a small increase in resonance produced by the F-35.

The nation’s two operational test and evaluation (OT&E) aircraft have also been used to support part of that programme’s syllabus, and to learn about the logistical challenges presented when the aircraft are away from a main source of spare parts. 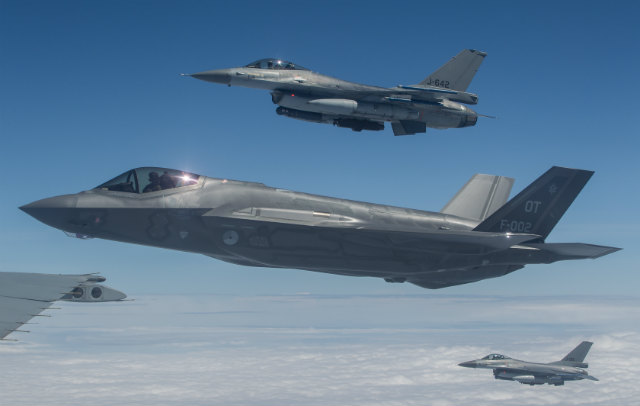 “With the F-16, we know exactly which parts we have to bring, due to the vast experience with the aircraft. In this deployment, we are gaining valuable experience in the necessary equipment an F-35 deployment needs to bring with them,” says 323 Sqn commander Col Bert de Smit. “This deployment is [also] a real live test case for the ALIS [autonomic logistics information system] that is such an important aspect of the operations of the F-35.”

Since the Dutch air force will use hardened aircraft shelters for its F-35s, the first deployment has also been used to trial operations from these types of hangars. In the USA, the aircraft are operated from sun shelters or larger hangars, and the confined space in a smaller shelter increases the sound and vibration levels placed on the airframe. Emission levels from the Pratt & Whitney F135 engine also needed to be monitored, to ensure ground crews can perform their work safely.

The preliminary outcome of this testing – integrated into the OT&E syllabus under the guidance of the F-35 Joint Program Office – shows operating the type from shelters is fully acceptable. Denmark and Norway also plan to use shelters with their fleets.

During the last part of the three-week deployment, the Dutch F-35s will be present at an open-house event at Leeuwarden air base. The next time its Lightning IIs will be in the country will be in 2019, when the first operational aircraft will arrive at the same site.