Assigned to Carrier Air Wing 1’s VAW-125 “Tigertails” squadron, based at Norfolk Naval Air Station in Virginia, the aircraft on board the carrier will now embark on a world tour conducting operations in the USN’s 5th, 6th and 7th Fleet areas of responsibility.

The USN’s 5th fleet is part of US Central Command, which is currently involved in the USA’s Operation Inherent Resolve mission against Islamic State militants in Iraq and Syria, and it has also been previously reported that the USS Theodore Roosevelt would deploy in support of that mission.

A second squadron is preparing to be tasked, which could be deployed on the next carrier task order, Jay Mulhall, director of business development for E-2 programmes at Northrop Grumman, told media at the Airborne ISR and C2 Battle Management conference in London.

This deployment comes as Northrop Grumman prepares to deliver the 17th E-2D aircraft to the USN in the coming weeks.

The E-2D is derived from earlier models of the AEW&C platform, with the current model including a more powerful APY-9 radar, as well as new avionics and a glass cockpit. 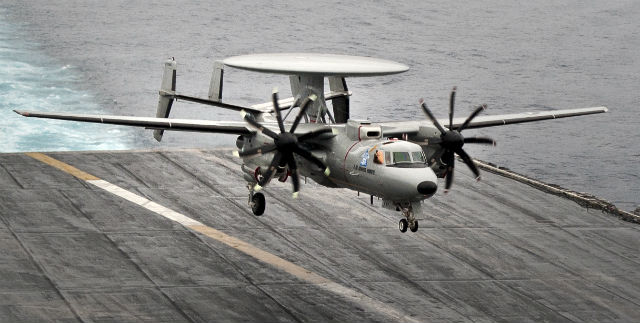 In parallel to delivering the aircraft to the navy, which signed a five-year multi-year contract for the procurement of the E-2D in June 2014, Northrop is internally investing in adding a “wet wing” capability to the E-2D to add extra fuel to extend its range, taking it from some 5h on station to approximately 8h.

A preliminary design review was conducted in 2014, and will be followed by a critical design review (CDR) in mid-2015. This capability is designed to appeal to potential international operators that would base the aircraft on land, Mulhall says. The USN does not have a requirement for a wet wing on its E-2Ds.

Under the multi-year, 26 aircraft will be delivered, which takes the procurement period for the USN out to FY2018. This is split into five aircraft per year for all years bar FY15, which will fund six.

A potential follow-on contract is expected to come after the first multi-year procurment, which, if it goes ahead, will take the navy to the full 75-aircraft requirement by 2027 when full operational capability is expected.

Meanwhile, Japan has identified a requirement for an E-2D to augment its E-2C Hawkeye and airborne warning and control fleet.

Mulhall could not disclose the required number of aircraft that Japan is discussing buying, but said it is “working to get that under contract”.

The USN multi-year allows for variations, which would allow for export orders for the aircraft. The navy has approved release of E-2D for “a number of countries”, Mulhall adds.