E-2D to carry out aerial refuelling test in 2016

Northrop Grumman expects to carry out the first aerial refuelling flight test of its E-2D Advanced Hawkeye airborne early warning and control (AEW&C) aircraft towards the end of 2016, following delivery of the first example earmarked for upgrade to its St Augustine, Florida facility.

Aircraft AA1 – the first E-2D built – was transferred from the VX-20 test squadron at NAS Patuxent River in Maryland to the E-2D’s newly-renovated St Augustine site in December, where it will receive the modification ahead of the planned trial.

The new capability will be integrated into new-build aircraft, and retrofitted on delivered E-2Ds to increase the time the type can operate on station, Jay Mulhall, director of global business development for E-2 programmes, tells Flightglobal.

The air-to-air refuelling modification has been developed using the E-2D’s predecessor, the E-2C Hawkeye, as a surrogate.

Ground testing that has included fuel transfer has already taken place with the new variant, so the work this year will transition straight to the “wet” transfer of fuel. Initial operational capability for the enhancement is expected around 2020. 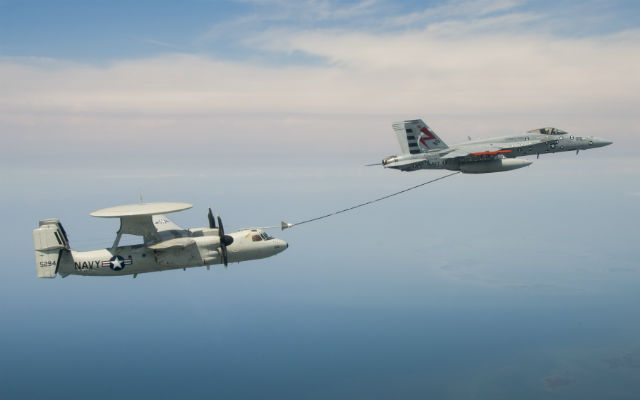 The full E-2D requirement for the USN is 75 aircraft, 22 of which have been delivered, including six handed over in 2015. Five deliveries are scheduled for 2016, with the first expected to roll out of the factory in the coming weeks.

The USN has contracted Northrop to provide 51 of the 75 aircraft, including 26 under a multiyear deal awarded in 2014. The company is still delivering pre-multiyear aircraft, and expects to start transferring the first under this procurement this year.

The refuelling modification is expected to be rolled out onto new-build E-2Ds from aircraft number 31 of the current 51, and will be offered as a retrofit for the first 30.

“The plan is to cut in at aircraft 31, and to have all 75 E-2Ds with this,” Mulhall says. “So at that point forward, every aircraft with the aerial refuelling capability will have the probe, new long-endurance seats for the crew, lighting changes for formation flying that are needed to form up on a tanker day or night, and software changes to assist the pilot in engaging the basket.”

Northrop is under contract to modify a number of aircraft with the capability under a refuelling engineering, manufacturing and development contract, and a production award is expected to follow. The company is also developing a “wet wing” capability for international land-based customers of the AEW&C aircraft, which can increase the endurance of the type from 5h to 7h by carrying 3,180kg (7,000lb) of additional fuel in the wings.

Through the US Foreign Military Sales programme, Japan purchased the first of a four-strong E-2D requirement in November, which will include the wet wing capability. Tokyo’s first Advanced Hawkeye is being manufactured in parallel with USN examples, and is expected to be delivered in 2018, Mulhall says.

Meanwhile, the first deployment for the E-2D was completed in December, during which the USN’s Carrier Air Wing 1’s VAW-125 “Tigertails” squadron was deployed onboard the Nimitz-class carrier USS Theodore Roosevelt.

In 2017, VAW-125 will take over from the forward-deployed VAW-115 “Liberty Bells” squadron that operates the E-2C Hawkeye at NAS Atsugi in Japan.

The VAW-121 “Bluetails” squadron will be the next to transition to the type and operate onboard a carrier, followed by the VAW-126 “Seahawks” unit undergoing training ahead of receiving the aircraft.