EADS has moved a step closer to launching flight trials of the advanced refuelling boom system (ARBS) which provides the cornerstone of its five-aircraft tanker programme in Australia and the basis for a proposal to replace some of the US Air Force’s Boeing 707-based KC-135s. 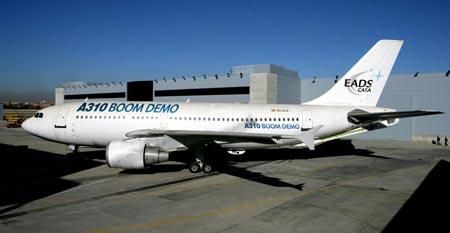 The first aircraft to be equipped with the new boom technology (pictured above) – an EADS-owned Airbus A310 demonstrator – was rolled out from the company’s Getafe plant near Madrid on 23 December and will soon begin a qualification campaign expected to total some 300-400 flight hours. EADS’s Military Transport Aircraft Division, which had planned to fly the demonstrator for the first time in mid-2005, says its original schedule has been delayed not by “major incidences, but by normal ones derived from a programme of this complexity.”

The development of the ARBS design (pictured below), which includes an approximately 1,200kg (2,650lb) boom mast with an extended length of 17.8m (58.4ft), represents a $90 million investment by EADS, which launched the project in the hope of breaking Boeing’s near monopoly on the global in-flight refuelling market. The European company has already secured its first order for the system, with the Royal Australian Air Force (RAAF) to receive five boom-equipped Airbus A330-200s from late this decade. 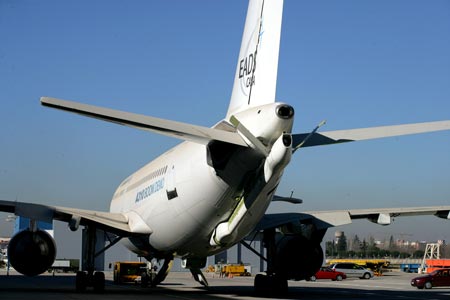 Airbus is scheduled to deliver the RAAF’s first green aircraft to EADS Casa for modification in May 2006, with the service to complete acceptance testing and declare the type in-service with the receipt of its first two aircraft by late 2009.

EADS North America and Northrop Grumman are also offering an A330-based system dubbed the KC-30 to meet the USAF’s delayed requirement for new tanker-transports. The companies will face competition from incumbent supplier Boeing, which is currently offering a KC-767 solution already selected to equip the Italian and Japanese air forces.

Previously owned by Airbus and formerly leased to Madrid-headquarted airline Air Plus Comet, EADS’s A310 demonstrator – EC-HLA – underwent structural conversion in Getafe from early last year. This involved reinforcing fuselage sections 18 and 19 to accommodate frames and stringers for the boom mast and its hoist mechanism, plus the integration of a cockpit-located boom operator station, under-fuselage stereoscopic and panoramic cameras, illuminators and approach lights.