EADS has confirmed that its Barracuda high speed reconaissance air vehicle has crashed during test-flights off the coast of Spain. 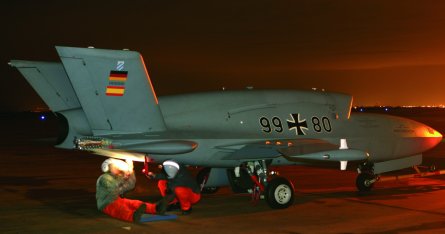 In a statement the company says: "An EADS-owned UAV has ditched into the sea on Saturday morning [23 September] upon approach for landing at San Javier Air Force Base, Murcia, Spain after a test flight. The test was part of the current flight trials and is one element of the broad field of UAV activities within EADS. There were neither people injured nor was third-party property damaged.

"The reasons for the accident are unknown. EADS is in the process of investigating the circumstances in close co-operation with the relevant authorities in Germany and Spain. As these investigations are ongoing, EADS is not in the position to release further details for the time being."

Barracuda made its debut flight at the same air force base earlier this year. The aircraft was first unveiled at this year's airshow in Berlin in May. The company-funded demonstrator was to be used to support a series of trials of UAVs in a networked battlefield environment for the German MOD from mid-2007.

The UAV was also to be used to support experiments into the potential development of a new common European medium-altitude long-edurance UAV based around re-use of the Barracuda avionics and core airframe.