Eclipse Aviation has temporarily grounded its five flight-test Eclipse 500 very light jets (VLJ) after finding a problem with the rear wing-spar attach-point in one of the aircraft. It is not yet clear whether the issue will impact customer deliveries, slated to begin shortly.

The grounding does not immediately impact the four completed production aircraft, two which have already been flown. Eclipse has a total of 32 aircraft in various stages of completion. 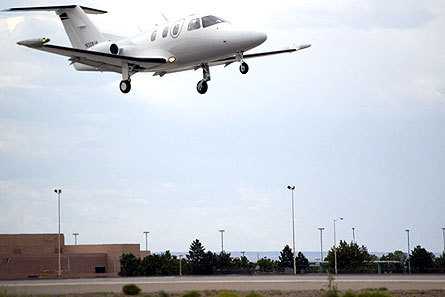 The company uncovered the problem - a loose bushing inside the rear wing attach point that had caused “excessive” wear - during the fitting of new larger tip tanks on a flight test aircraft. An inspection of the other four aircraft revealed similar issues, though “no evidence” has been found on the production aircraft. Eclipse attributed the problem to an installation error and has modified the bushing installation procedure.

Windshield and side-windows cracking has also been a problem. Eclipse revealed that cockpit windshields and side windows have cracked seven times due to a “combination of thermal and pressurization loads causing a fatigue failure of the outside layer of the acrylic.”

The temporary solution to the cracking is 50-hour inspections and replacement of the windshields after 100 flights. “Please be assured that Eclipse is not accepting this inspection interval as permanent and we are working very aggressively to revert back to a normal inspection interval with the rest of the aircraft,” the company says.