"AAR is one of the four key projects in which the EDA and its member states have identified a capability gap," says Air Cdre Peter Round, the agency's director, capability, armament and technology. "We are working hard to overcome the shortfall in Europe."

Speaking during the European Air Refuelling Training (EART) exercise at Eindhoven air base in the Netherlands early this month, Round described tankers as a "critical enabler" for current operations. The annual event was first staged in 2014, to address lessons learned during the allied campaign Unified Protector mounted over Libyan airspace three years earlier.

Highlighting the current challenge facing European air forces operating ageing equipment, two of the tankers assigned for the EART media day – a French air force Boeing C-135 and a Royal Netherlands Air Force KDC-10 – were unavailable due to technical issues. The remaining assets: a German A310 and an Italian Boeing KC-767, were used to support combat aircraft participating in the multinational exercise Frisian Flag. 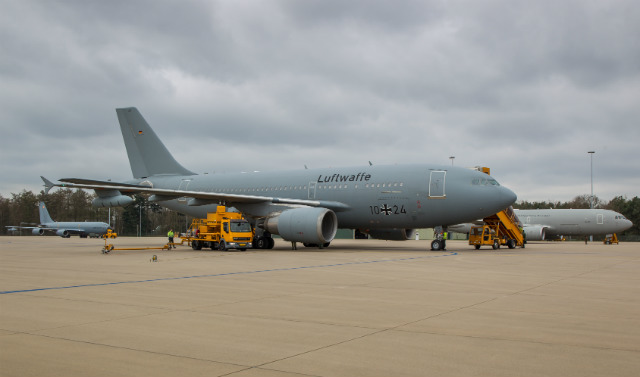 As well as staging such exercises, the EDA is striving to optimise the use of existing capabilities by boosting interoperability via entities such as the European Air Transport Command. It also is attempting to streamline the various national certification processes which lead to clearances to refuel individual aircraft types as a priority.

The EDA also is planning to acquire additional refuelling pods that can be used by partner nations operating the tanker-capable Airbus A400M.

However, its biggest AAR initiative is linked to a multinational programme to acquire and operate a pooled fleet of A330 multirole tanker transports by 2020. The Netherlands and Luxembourg signed a memorandum of understanding last year to acquire an initial two aircraft, plus two years of in-service support.

Belgium, Germany and Norway have also signed a declaration of intent to join the pooled fleet scheme. Their addition could potentially lead to a long-term requirement for a pooled fleet of between eight and 11 aircraft, according to the EDA.