AMMROC has constructed one of the most modern MRO facilities in the world, with the aim to becoming one of the industry’s leading providers of specialist services this decade

A 90-minute drive from the bustle of downtown Abu Dhabi, near the Oman border, is the oasis city of Al Ain. On the far side of its quiet airport, surrounded by red desert mountains, sits the newest and one of the most impressive independent military maintenance, repair and overhaul facilities in the industry.

EDGE’s flagship infrastructure project, AMMROC’s 1km sq site opened for business last year, inducting its first aircraft just as the pandemic broke out in March 2020. Since then, despite the challenges of Covid-19 restrictions, it has worked on many more. Its scale, as you approach the site from the highway that encircles the airport, is significant. 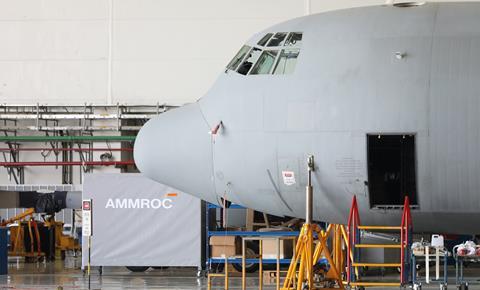 The complex comprises five, multi-purpose hangars backed by 30 workshops including a paint hangar and the most sophisticated helicopter blade repair facility outside the USA. It has airside access to the airport’s runway. The main buildings total 140,000 sq m.

The site is already a centre of excellence for the Lockheed Martin C-130H, Sikorsky UH-60 Black Hawk, two types operated by the UAE and in the wider region, the Dassault Mirage 2000 engine and components, as well as the F16 engine and components. It is also a Lockheed Martin Authorized Hercules Center and has huge potential to increase its capabilities and customer base, maintains Hareb Thani Al Dhaheri, AMMROC’s chief executive. He notes that the business is able to support more than 35 platforms.

“We are open to all aircraft types operating in this region and a little bit beyond, and we are gearing up our workshops and our team to be ready for expansion,” he says. 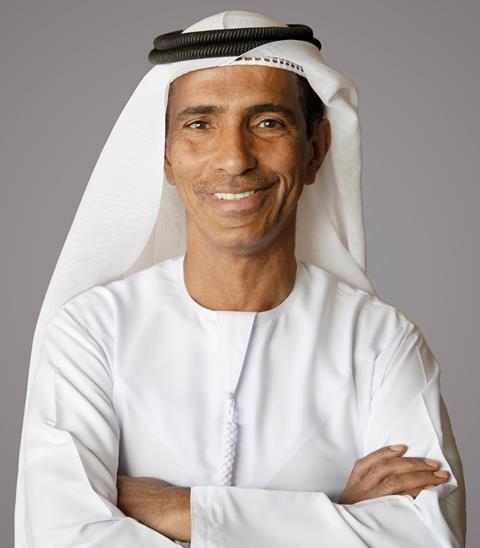 The rotorcraft opportunity is a key focus. AMMROC’s experience with the Black Hawk – it is the world’s only authorised armed integrator of the type – and its investment in state-of-the-art blade repair and engine testing machinery means this expertise can be “ leveraged onto other platforms, with just some modifications”, continues Al Dhaheri.

While the Al Ain facility is new, AMMROC has been slowly gaining a reputation in the industry since being established in 2010, initially as a joint venture with Sikorsky and Lockheed Martin, to support the UAE military with its fixed wing and rotary types.

Previously operating from hangars at Abu Dhabi’s main international airport, the move to dedicated premises in Al Ain, with room to expand, is part of a strategy to become one of the world’s top 15 AMMROC is the region’s only certified MRO centre for the C-130 military MROs within “the next few years”, says Al Dhaheri.

Since 2020, AMMROC has been exclusively owned by EDGE, although Al Dhaheri says the relationship with Lockheed Martin (now the parent of Sikorsky) “remains strong”, with OEM approvals in place for most repairs and modifications.

Aside from the main hangars, the site – which employs just under 600 staff, from 24 nationalities, but with a growing 31% contingent of Emirati nationals – contains two secure US ITAR [International Traffic in Arms Regulations] controlled buildings, strictly out of bounds to all except those with special clearance.

While AMMROC is the region’s only certified MRO centre for the C-130 and its civilian counterpart the L-100, it has also carried out work on other transport types, including the Airbus Military CN-235 and A330 MRTT (Multi-role Tanker Transport).

Its work for the domestic customer means the business is one of the world’s only third-party MRO service providers that has the experience and capability to execute a national air force fleet-wide performancebased logistics (PBL) programme, says Al Dhaheri.

The expanse of the AMMROC complex is matched by the scale of EDGE’s ambition to become a major player in military, and commercial, MRO over this decade, with the capacity and capabilities to attract customers from all over the Middle East and further afield. Its location in the UAE means much of Africa and Asia is within easy reach. Those hangars and workshops could be even busier in the coming years.

Not far from the AMMROC complex at Al Ain airport, dozens of helicopter pilots are learning the necessary skills to fly, on simulators, and on the real thing. HORIZON is the region’s leading helicopter flight academy and, like AMMROC, part of EDGE’s Mission Support cluster. While the operators servicing the UAE’s large offshore oil sector provide a coremof recruits, the business also takes students from all over the wider Middle East.

HORIZON’s fleet of 40 helicopters is anchored by the single-engine Bell 505, which it uses for basic training, but it also operates the Bell 429 twin for night-flying and training for more specialist missions such as search and rescue.

One of EDGE’s oldest companies, it began life in 2002 and for a while also provided fixed-wing training for Etihad Airways cadets. However, HORIZON is now firmly focused on the rotary market, one which chief executive Hareb Thani Al Dhaheri is convinced can only continue to grow.