Egyptian air accident investigators have clashed with US counterparts over the cause of the fatal Flash Airlines Boeing 737-300 crash at Sharm El-Sheikh, by highlighting technical problems and rejecting strong US suggestions that pilot disorientation led to the accident.

The Egyptian civil aviation ministry’s final report into the accident fails to give a clear cause of the 3 January 2004 crash but contains a frank and extensive exchange of views between the US and Egyptian investigators, revealing strong disagreement between the two sides.

It parallels the bitter dispute between the same two countries over the 1999 EgyptAir Boeing 767 crash off New York, when Egyptian officials refused to accept US findings that crew actions, rather than technical failures, brought the aircraft down.

The newly-released final report into Flash Airlines investigation does not establish a definitive reason for the crash, stating: “No conclusive evidence could be found from the findings gathered through this investigation to determine a probable cause.”

Spatial disorientation affecting the pilot is among the reasons listed as potentially playing a role in the accident. But the analysis does not, by any means, rule out technical problems. While it cannot find evidence of failure in the engines, auxiliary power unit or other critical systems, the report lists aileron trim faults, a jammed spoiler wing cable, and autopilot problems, as possible causes of – rather than just possible contributors to – the accident.  It says that “any combination” of the various findings could have led to the crash.

Through a joint agreement Egyptian, US and French investigators conducted an in-depth scenario assessment focusing on two areas – human factors and technical issues – in order to eliminate unlikely sequences of events.

This has resulted in a list of possible contributing factors which might have led the 737 to suddenly roll to the right while executing a climbing left turn, less than three minutes after departing for Cairo en route to Paris. The aircraft, heading out over the Red Sea at night, entered a dive from which it failed to recover. All 148 occupants were killed.

“Although the crew at the last stage…attempted to correctly recover, the gravity of the upset condition with regards to attitude, altitude and speed made this attempt insufficient to achieve a successful recovery,” says the report.

While the 1,300-page report emphasises the possibility that technical problems led to the crash, US comments on the report’s draft version clearly illustrate intense controversy over the probe’s conclusions.

In an appendix of comments running to nearly 130 pages the US investigators state: “The only scenario identified by the investigative team that explained the accident sequence of events, and was supported by the available evidence, was a scenario indicating that the captain experienced spatial disorientation, which resulted in his making inadvertent actions that caused the accident.”

They claim that evidence does not back up theories of trim, spoiler and autopilot problems. French investigation agency Bureau d'Enquêtes et d'Analyses pour la Sécurité de l'Aviation Civile (BEA) adds that the trim and autopilot issues would still have left the crew able to control the aircraft, and instead stresses that inadequate training and crew resource management, as well as fatigue, could have been contributory factors. The US team says that there was no indication of an aircraft-related malfunction and that the 737 remain fully-controllable and responsive to flight controls throughout. A timeline is pictured below. 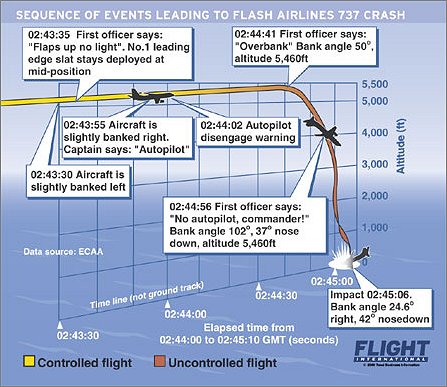 It claims that Egypt’s investigation of operational and human factors was “minimal” and that its documentation of the captain’s training history, and issues relating to fatigue and crew resource management were “not fully developed and analysed” in the draft report “despite being pertinent” to the circumstances of the accident.

Flash Airlines faced operational restrictions in Switzerland, over safety deficiencies, in the year before the accident and the US investigators say that this information should have been included in the final report. But the Egyptian ministry dismisses the principal US opinion regarding spatial disorientation by the captain.

Flash Airlines chief executive Mohamed Nour says: “Flash does not accept the existence of any spatial disorientation on the part of the flight crew, or that it is appropriate for the report to make any finding to that effect, in the absence of unequivocal and positive indicators of its presence.”

Within the appendix the US and Egyptian sides trade opinions over dozens of other details. The Egyptian ministry says it is “satisfied” that its pilot training and licensing procedures are in line with ICAO requirements. It also claims that the Swiss operational ban was “due to a conflict on financial issues” rather than safety matters.

Investigators’ recommendations to operators and manufacturers concentrate on assessing autopilot behaviour. But they also advise that spatial disorientation studies should be carried out in order to enable crews to recognise and counter the phenomenon. Pilot training should also focus on early detection of conditions which could lead to aircraft upset during flight, says the report, and the use of timely recovery strategies.