Elbit Systems is building a distributed simulation centre at the Israeli air force's Hazerim air base to allow students to fly missions in the Alenia Aermacchi M-346, which will soon become the service's advanced trainer. The new centre will allow the crews of four aircraft to train together.

According to Alon Afik, Elbit vice-president for training and simulation, the centre will feature an embedded simulation capability that will enable it to simulate different types of missions using emulated radar and electronic warfare systems that are not part of the trainer's mission equipment.

"We will generate the outputs of sensors like radar and EW into the trainer aircraft cockpit screens," Afik says. This will involve "injecting" different scenarios with the help of a datalink, which will also be incorporated with the production aircraft by Alenia Aermacchi. 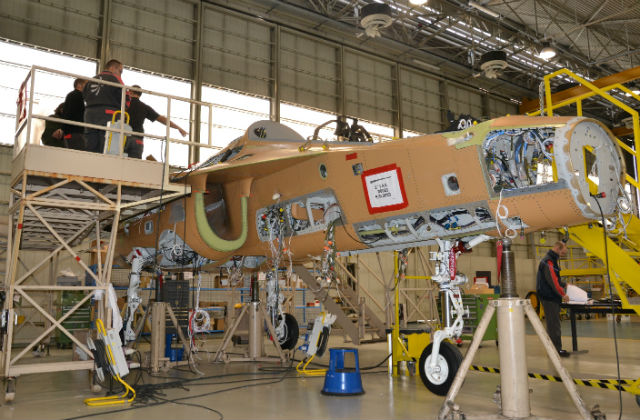 The first M-346 will be delivered to the Israeli air force next year. The trainer will be dubbed "Lavi" - the name previously carried by the Israel Aerospace Industries fighter developed in the 1980s and scrapped because of heavy US opposition.

Currently, Israeli fighter pilots perform advanced training on two types of aircraft – the Douglas A/TA-4 Skyhawk and Lockheed Martin F-16A/B. With the delivery of the M-346, all pilots in the fighter course will use the new type.

Israel's M-346s will be operated by the "Flying Dragon" squadron from Hazerim.