When Airbus’s e-Fan demonstrator made the first-ever battery-powered crossing of the English Channel from Lydd to Calais on 10 July, the well-trailed 40nm (74km), 37min flight made headlines as far afield as the USA and Australia, not to mention England and France. But the exercise was far more than a barnstorming publicity stunt. The aircraft has been extensively developed from the version unveiled at Bordeaux in 2014, and Airbus is driving hard toward commercial production.

According to Detlef Müller-Wiesner, who heads Airbus’s electric aircraft directorate, preparation for the cross-Channel flight was a significant learning experience. The airframe – two tandem seats and twin ducted fans driven solely by battery power – made its 100th flight last month at the Paris air show. However, the aircraft flown at Le Bourget, and then from Lydd to Calais, has been heavily modified since last year – and Airbus has worked hard with France’s DGAC air safety authority to verify the safety and reliability of electric flight components, for which there are as yet no standing certification rules.

Müller-Wiesner says that partners including Safran, Siemens and Zodiac modified and tested the electric engine and wiring, while Airbus carried out a wide-ranging failure mode analysis. Bench, ground and flight testing – and training of pilot Didier Esteyne – were all undertaken to prepare mission profiles able to cope with degraded flight modes. Without all this extra preparation, Müller-Wiesner says the flight could technically have been made “two or three weeks before Le Bourget”.

Performance improvements to the aircraft – which Müller-Wiesner likes to call “e-Fan 1.1” – include increased endurance to 1hr (up from 45min as first flown last year) and, he says, a corresponding improvement in agility. In test flights E-Fan has now reached altitudes as great as 3,500ft, and a maximum speed of 200kts.

All of these developments are helping Airbus engineers with the final design of the “2.0” model, which will make its first flight in late 2016 or early 2017 – and then be produced in volume at a purpose-built factory in Pau, southwest France, where ground will be broken later this year.

Visitors to the Paris air show saw a full-scale model of the 2.0, which will be a side-by-side two-seater designed to appeal to flight schools. Müller-Wiesner says that model, which drew style cues from exotic sports cars, is “essentially” what will come out of Pau.

Meanwhile, Airbus is readying further modifications to its demonstrator. A “1.2” version will test the systems that will end up in a four-seat hybrid aircraft called e-Fan 4.0, which will add a kerosene-engine “range extender” to the battery power pack. In Calais, Airbus engineers have a test bench ready for the extender; flight testing should begin “soon”, promises Müller-Wiesner.

Airbus may have been technically well-prepared for the Channel crossing, but the event was not without drama reminiscent of the first air crossing 106 years ago, when Louis Blériot faced several rivals literally racing to beat him to it and make their mark. Indeed, by some counts, Airbus only claimed a historic second – having been pipped to the first electric prize by French stunt pilot Hugues Duval, who the evening before “got the [electric crossing] ball rolling” by flying his diminutive all-electric Cri-Cri from Dover to Calais, a 17min crossing.

But having apparently been towed into the air, Duval did not meet Airbus’s record definition of a “twin-engine electric plane taking off by its own power”.

A third attempt to make the first electric crossing – with an Alpha Electro aircraft by French maker Pipistrel – was grounded at the 11th hour after the withdrawal of the electric motor by its supplier, Siemens, also a partner to Airbus’s e-Fan project. Pipistrel, whose aircraft was being readied for the record attempt by a French distributor, issued a statement saying that Siemens had warned it off the attempt claiming the motor that had not be designed for flight over water, and went on to demand return of the motor, threatening legal action to stop the flight.

Siemens in a statement says it “always” likes to support electric flight but “would never put its own safety demands aside”, adding that there had been no agreement between it and Pipistrel regarding the cross-Channel attempt.

According to Pipistrel, the Alpha Electro is available to order for delivery “soon”, although it added: “but maybe not with a Siemens motor any more”.

Airbus described its bid as a “homage” to Blériot, whose 1909 crossing was made in the opposite direction. There may even have been a little of Blériot’s anxiety about actually making the flight, as Esteyne adjusted for changing winds. In the event, Esteyne’s flight bore one surprising similarity to Blériot’s: time. Blériot was aloft, at a maximum of about 230ft above the sea, for 36min 30s – apparently a bit quicker than Esteyne, whose altitude reached about 3,280ft.

Claims by either Duval or Airbus to being first will in any case rely on another definition of the feat. Both crossed the Channel using aircraft driven by battery-powered electric motors, but neither made the first electric-powered crossing.

That distinction goes to another pioneer, Paul MacCready, whose solar-powered Solar Challenger in 1981 set the then-world record for the highest, farthest and longest solar-powered manned flight, with a 141nm, 5h 23min trip from Corneille-en-Verin airport, north of Paris, across the Channel to RAF Manston.

Regardless, Duval wins a prize for grace. Following his arrival in Calais, he said it was with “great anticipation that we await the feat of e-Fan”. To Esteyne, he added: “Good luck!” 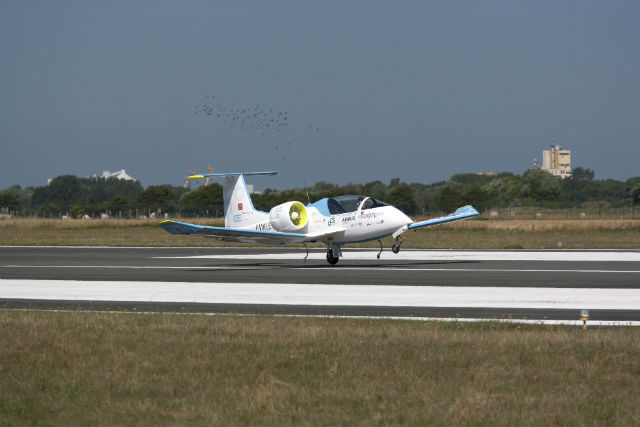