Rolls-Royce has conducted ground tests of a hybrid-electric propulsion system built around an M250 turboshaft engine, and plans to start flight trials of the equipment in 2021.

The UK manufacturer intends to employ the system, which it calls "M250 hybrid", across a range of "transport platforms", including electric vertical take-off and landing (eVTOL) vehicles, general aviation aircraft and helicopters, it says.

Rated at 250shp (190kW), the M250 is mostly employed on helicopters, for example the Bell 407, but has been used on fixed-wing aircraft too. R-R says it selected the engine – originally developed by Allison during the 1960s – "for its maturity, power density, ease of maintenance, and high reliability".

R-R plans to develop a system with power ranging from 500kW to 1MW.

The ground tests at R-R's US facility in Indianapolis covered the system's performance in three operating modes – series hybrid, parallel hybrid and turbo-electric – and evaluated the behaviour of each individual component.

In series-hybrid mode, the gas turbine exclusively charges the battery, which in turn supplies all power for propulsion and onboard systems.

Parallel-hybrid operation sees both the turboshaft engine and electrical system provide thrust, while other equipment is powered by the battery.

In turbo-electric configuration, the battery is redundant – the engine operates as a turbo-generator supplying electricity for propulsion and other onboard equipment. 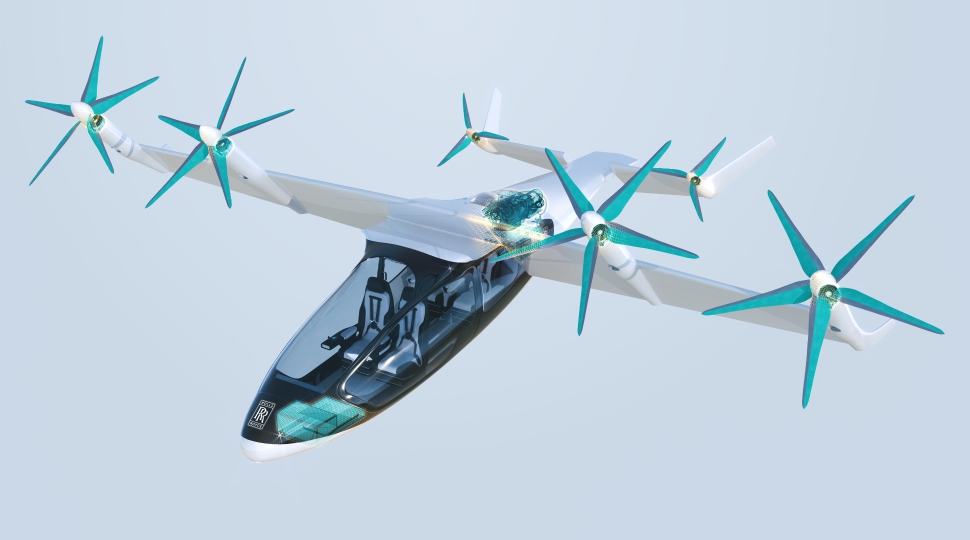 R-R foresees potential application of the hybrid power system on different platforms, including an eVTOL concept unveiled in 2018

R-R says the tests covered simulated take-off, cruise, landing and taxi operations and confirmed that the system would be suitable for potential eVTOL air mobility vehicles weighing up to 2,000kg (4,400lb) with a range of 870nm (1,600km).

At the 2018 Farnborough air show, R-R unveiled an air taxi concept for up to five passengers, featuring six rotors on tilting wings to facilitate vertical take-off and landing.

Together with Airbus and Siemens, R-R is separately in the process of developing a 2.5MW hybrid propulsion system based an AE 2100 turboshaft engine, which is to be tested in flight on a modified BAe 146 regional jet from 2020.

Under that project, named "E-Fan X hybrid2", the manufacturers plan to initially replace one of the four-engined aircraft's turbofans with an electrically driven fan powered by a hybrid-generation system inside the fuselage.

A second engine is to be replaced with an electric fan at a later stage.

R-R says the two projects complement each other and notes that the M250 hybrid is addressed at smaller aircraft.