Tanker aircraft from four nations are nearing the completion of a European Defence Agency-backed exercise intended to increase interoperability and co-operation.

Being conducted from Eindhoven air base in the Netherlands from 13-24 April, the European Air Refuelling Training (EART) activity is also supporting combat aircraft participating in the multinational Frisian Flag manoeuvres, which are running simultaneously from Leeuwarden air base.

The second such EART exercise – following another conducted from the same site in April 2014 – involves a McDonnell Douglas KDC-10 from the Royal Netherlands Air Force’s Eindhoven-based 334 Sqn. Also involved are a French air force Boeing C-135FR from Istres air base and a German air force Airbus A310 multirole tanker transport (MRTT) from Cologne. An Italian air force Boeing KC-767A from Pratica di Mare air base was also deployed for the second week only. 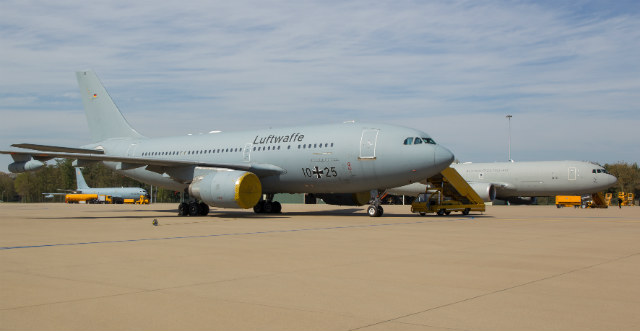 Last year’s inaugural EART session had providing a joint training opportunity as its main goal, with assets from multiple nations operating from the same base and learning from each other through combined planning and debriefing. The need for improved interoperability had been underscored during earlier multinational missions, including NATO’s 2011 Operation Unified Protector over Libya.

“This year there are initial academic classes next to the practical flying sessions, and a mentor concept in which experienced crews are helping juniors is adopted,” says Col Niels Lokman, head of the functional division at European Air Transport Command (EATC).

Over the coming years the joint training is expected to assist in the development of harmonised procedures between partner nations, which should remove possible issues when refuelling foreign assets.

Meanwhile, Dutch air force Col Johan van Soest, Eindhoven base commander, notes that the current fleet of tankers available to EATC members is small and ageing, while the need for their capacity is increasing.

As a result, Belgium, Germany, Luxemburg, the Netherlands and Poland have agreed to co-operate in jointly purchasing a fleet of four new tanker/transports. These will be assigned to a new multinational unit based at Eindhoven, with forward operating bases in all participating countries, with an aim to eventually expand the group with additional nations and more aircraft.

A request for proposals for the purchase of four Airbus A330 MRTT aircraft, with an option for another four, will be sent to the manufacturer in May, van Soest says. France has already made its own selection of the type, with 12 to enter service from 2018.