Everything about the Boeing 787 Dreamliner 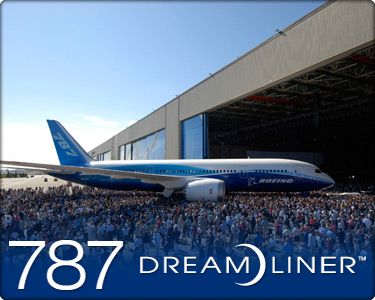 A range of new technologies are being incorporated into the Boeing 787. At least half of its primary structure will be built from composite materials, more than any other airliner. The aircraft’s systems use an open architecture and are greatly simplified. The traditional air conditioning and de-icing systems have been replaced on the Boeing 787 with electrical systems not requiring bleed air from the engines, saving fuel.

The Boeing 787 Dreamliner programme came out of the 7E7 study for a conventional aircraft to replace the original Sonic Cruiser programme after Boeing decided it was over-ambitious. Board approval for the Boeing 787 came in late 2003 with full launch and a record order for 50 aircraft from All Nippon Airways. Since then 29 airlines have ordered 393 Boeing 787s, making it the most successful aircraft launch in Boeing’s history.

The configuration of the Boeing 787 was finalised in September 2005 and detailed design is continuing at 135 companies worldwide preparatory to assembly of the first aircraft in 2006. Demand is so high that Boeing is considering increasing the production rate of the 787 from the initial four aircraft per month to 16 aircraft. The production line is already fully booked to 2011, and some airlines have production slots retained as far ahead as 2016. 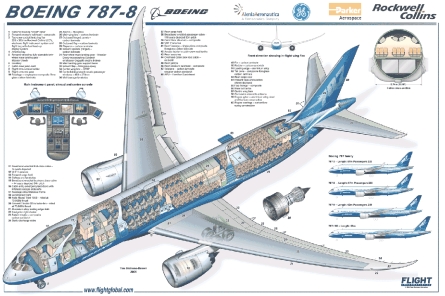 Read Steve Trimble's blog as he covers the launch
In a galaxy far, far away
787 races towards 1000 sales
Airbus vs Boeing - a cartoon caper
EADS to build Boeing 787 (up to a point)
787 strikes deep affection in the heartlands of America and Britain
Dream date for Boeing's 787 roll-out

Read more about the Boeing 787 from Flightglobal.com:

Boeing 787 on the Flight Global Forums -

The latest discussions on Flightglobal's Fourms:

Boeing 787 Aircraft Articles from around the web-

More Boeing 787 News from around the web