Once an endangered species, the US Air Force's Lockheed Martin F-22A Raptor stealth fighter is soaring on the success of its first operational deployments.

A three-year contract for 60 aircraft is about to be signed, and the USAF is gearing up to seek funds to continue buying 20 Raptors a year for the foreseeable future.

Now the USA must decide if it is ready to release the Raptor - winner of this year's Collier Trophy - for export.

"The F-22 is healthier than at any other time. The plane is performing well and the programme is stable," says US defence analyst Loren Thompson. "There is some disagreement within the air force on whether it should be exported. It may have to await a change in administration."

A Japanese team evaluating contenders for its forthcoming F-X fighter competition has been denied access to the F-22 because US legislation bars its export. But Japan's defence minister last month asked his US counterpart for data on the Raptor, raising the issue from the military to the political level, says Thompson.

The interest of Japan and others has been piqued by the F-22's overwhelming performance in initial operations, including its just-concluded first overseas deployment to Kadena in Japan. 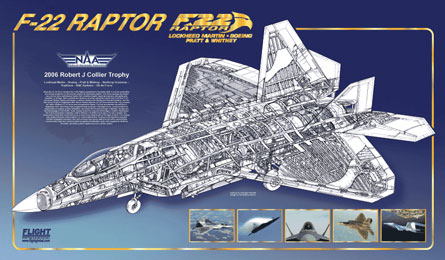 When the US Air Force declared the F-22 operational in December 2005, sceptics doubted the Raptor was ready for combat. Just months before, Pentagon testers had determined the aircraft was operationally effective in the air-to-air role, but not operationally suitable because of reliability and maintainability shortfalls.

Follow-on testing found the F-22 to be operationally effective on air-to-ground missions against fixed targets, but the fighter has yet to be graded operationally suitable. This has not prevented the Raptor achieving impressive results in its first deployments.

Exercise Northern Edge in Alaska in June last year was the F-22's first deployment outside the continental USA and was followed by the Raptor's first Red Flag in February and the overseas deployment to Kadena. Information on the F-22's performance in Japan is still scarce, but data from Northern Edge and Red Flag show the aircraft to be both lethal and usable.

"Northern Edge was not an Air Force-only test of the F-22. It was a no-kidding joint exercise," says Lawson. "The scenarios were what the F-22 would do in a real fight: escorting B-2s in, protecting the skies, and operating with and against other fighters."

In contrast, Red Flag was set up to tax the F-22, he says. "It was focused on putting it at a disadvantage and trying a lot of different tactics."

In Alaska, the F-22 achieved an unprecedented 144:0 kill ratio in the first week of Northern Edge. "In the first week of the fight, the preponderance of engagements were beyond visual range. In the second week they got into the merge and took a couple of shots," says Lawson, pointing out that the pilots averaged less than 100h on the aircraft. The final tally was 80:1.

Specific kill ratios were not released for Red Flag, the US Air Force says, because each of the two "wars" staged every day involved different threats and objectives.

"In general, compared to the last several Red Flag exercises that did not include F-22s in the blue air force mix, the overall blue air package was more than twice as effective," says the USAF.

There was one simulated F-22 kill, in what Lawson describes as "peculiar" circumstances. A red fighter regenerated unbeknown to the blue force and the F-22 pilot, unaware the aggressor had re-entered the fight, did not attack the aircraft and instead took a shot.

To simulate a larger red force, "killed" aggressor aircraft fly back to a line where they regenerate and re-enter the fight. The aggressor pilots found fighting the F-22 frustrating, says Lawson: "They were not getting off the regeneration point."

Notwithstanding these early demonstrations of its "see first, shoot first" lethality, Raptor tactics are still in their infancy. One discovery during Northern Edge, Lawson says, was the pilot's ability to use the F-22's "incredible situational awareness" to act as a forward air controller (FAC), co-ordinating other aircraft.

The four aircraft in an F-22 formation are connected by an intraflight datalink, allowing each pilot to see a picture of the battle generated by all four sets of radar and sensors.

After expending its weapons, Lawson says, the F-22 was able to stay in the fight and act in a co-ordinating role using this four-ship "God's eye view".

He adds: "We need to train pilots to act in the role, and we need to learn how to do it better." Because the stealthy F-22 cannot communicate via datalink beyond the four-ship formation, the FAC role has to be performed by voice, but a wideband datalink connecting the F-22 to other platforms is planned for a future upgrade.

Both Northern Edge and Red Flag exercised the Raptor's air-to-ground, as well as air-to-air capabilities. Introduced during development, the ability to carry two 450kg (1,000lb) JDAM GPS-guided bombs shifted the F-22 from a focus on pure air superiority, and future upgrades will expand its air-to-ground capability.

F-22s has dropped 50-60 JDAMs in Combat Hammer exercises at Hill AFB in Utah with 100% success, says Lawson. A further 26 were dropped during Northern Edge, all direct hits according to the USAF.

Despite concerns over the F-22's operational suitability, results from the initial deployments are positive. Twelve Raptors from the 27th Fighter Squadron flew 102 of 105 planned sorties during Northern Edge, while 14 aircraft from the 94th FS flew all 134 sorties planned for Red Flag.

According to USAF data for Northern Edge, three key measures - the mission abort rate, the time aircraft were not available because of maintenance, and the percentage of aircraft fixed within an 8h period - were all better than standard.

"We are exceeding expectations for reliability growth," says Lawson. "For this level of maturity the mean time between maintenance number is impressive and the mission capable rate is very good."

At the time of initial operational testing in late 2004, the aircraft had logged 7,000h when the second phase of follow-on testing began last month, the total had risen to 27,000h.

Follow-on testing is evaluating supersonic JDAM release and defensive avionics improvements. The next upgrade, Incre­ment 3.1, is in development for deployment in 2010 and includes the 115kg Small Diameter Bomb and air-to-ground synthetic-aperture radar and electronic attack modes for the Northrop Grumman APG-77(V)1 active electronically scanned array radar.

Now in definition, Increment 3.2 will expand SDB capability to supersonic release and add new air-to-ground modes and the TTNT wideband IP-based datalink, allowing the F-22 to share the sensor data gathered as it performs its missions.

Wider knowledge of the F-22's capabilities is stimulating export interest, but political and technical hurdles remain. Instead the USA has tried to steer attention towards the Lockheed Martin F-35, which shares many of the same stealth, sensor and software technologies.

"The problem is there is no provision in the F-22 for technology security," says Thompson. "The F-35 was designed from its inception to protect sensitive technology."

Thompson says Japan's particular interest is the F-22's capability against cruise missiles, with its supercruise performance and powerful radar allowing the fighter to intercept the weapons at long range.

He expects a decision will be taken to release enough information to enable Japan to decide whether it wants the Raptor.