The head of US Air Combat Command says it would be his dream to restart production of the Lockheed Martin F-22 air superiority jet as potential adversaries like Russia and China “close the gap” with Western air power.

But the chances of the Raptor, which is still considered the world’s premier air-to-air combat jet, re-entering serial production is likely to remain a dream due to year-to-year defence budget uncertainty and the introduction of the air force’s top three priorities – the Lockheed F-35 multirole fighter, Boeing KC-46 tanker, and Long-Range Strike Bomber.

“I dream about it every night in the hopes it will happen, but I can’t tell you what the cost would be,” says Gen Herbert "Hawk" Carlisle. “With the fiscal environment we’re operating under, I don’t know if we’d be able to get that through Congress or OSD (the Office of the Secretary of Defense).”

F-22 procurement quantities were trimmed repeatedly, going from 750 to 339 and production was finally capped at 195 aircraft – which Carlisle calls the “biggest mistake ever”. 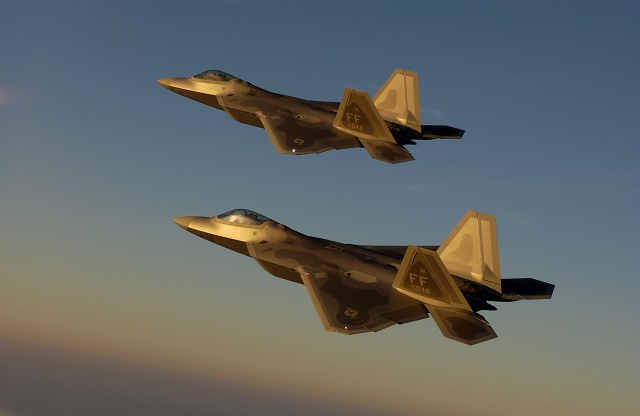 The Lockheed Martin F-22 was first called into combat in September 2014 against Islamic State militants in northern Syria and more recently the Raptor completed a training deployment to Europe.

But instead of producing more F-22s as a stopgap measure until a sixth-generation air superiority aircraft comes online in the late 2020s, Carlisle and USAF chief of staff Gen Mark Welsh point to Boeing F-15C upgrades and more dependence on F-35 and F-22 teaming as the way forward.

“We have to have the F-35,” Welsh said at an Air & Space Conference in Washington this week. “It’s not intended to be an air superiority fighter; it was designed to be a complimentary fighter and to do the multi-purpose air-to-ground work while the F-22 did the air-to-air work. The F-22 buy was curtailed and now we don’t have enough F-22s to do large theatre operations in the air-to-air arena.

“We have to supplement them with something near-term and that’s going to be the F-15C – which is why we have to upgrade it with AESA radar and other things to be credible in that arena in the next 10 years.”

Welsh says relying more on the F-15C and F-35 is the “only practical solution” to maintaining dominance in air-to-air realm – not restarting F-22 production. Although, he admits the air force has a serious capacity problem, having slimmed down from 188 fighter squadrons at the end of the Cold War to just 49 squadrons in the current five-year plan.

Today, America has four active fighter production lines including the Boeing F-15, F/A-18 and Lockheed F-16 and F-35, however, all but the F-35 line will be shuttered by the end of the decade without additional domestic or international orders.

Some industry officials have said privately that it would be very possible restart F-22 production since much of the tooling and manufacturing equipment remains intact in storage, but it would be expensive and the supplier base has already moved onto other projects.