The Lockheed Martin F-22 Raptor may be the world’s greatest air superiority jet, but the supercruise fighter came with some major structural flaws that are still being addressed.

One $350-million programme in particular is making a mix of five major structural changes to 162 aircraft, including a mid-fuselage and engine bay retrofit, just so each can reach its promised service life of 8,000 flight hours.

Another ongoing effort, known as the reliability and maintainability maturation programme (RAMMP), is buying 10,824 upgrades kits through 2020 at a cost of more than $1.7 billion. The kits deal with various deficiencies, from the landing gear light that doesn’t always work to a $30 million upgrade of the cockpit’s primary multifunction display.

US lawmakers have taken particular interest in the cost of fixing the Raptor, passing legislation in 2013 that requires the air force to report on its modernisation activities.

According to the latest report seen by Flightglobal, RAMMP has “steadily improved” the aircraft’s mission fleet availability rate, which currently stands at 62.8% compared to the average of 40% when the Raptor entered service in 2005.

The structure retrofit programme (SRP) is about 64 jets through its 162-aircraft programme of record and work is expected to wrap up in 2021 – about one year later than predicted last year.

According to the report, the air force is almost done shifting the structural repairs programme to its Ogden Air Logistics Complex at Hill Air Force Base in Utah.

The work had previously been done at Lockheed Martin’s plant in Palmdale, but USAF dumped the facility in favour of doing the work itself because of well-documented “cost, schedule and quality issues”. The report shows that Lockheed delivered about half the number of aircraft it was supposed to in fiscal years 2012 and 2013, and that poor performance continued through 2014.

“Actual installs fell short in FY-12 through FY-14, primarily due to poor contractor performance,” the report says. “Since SRP operations have been consolidated at Ogden ALC, delivery performance has been very close to the current scheduled plan.” 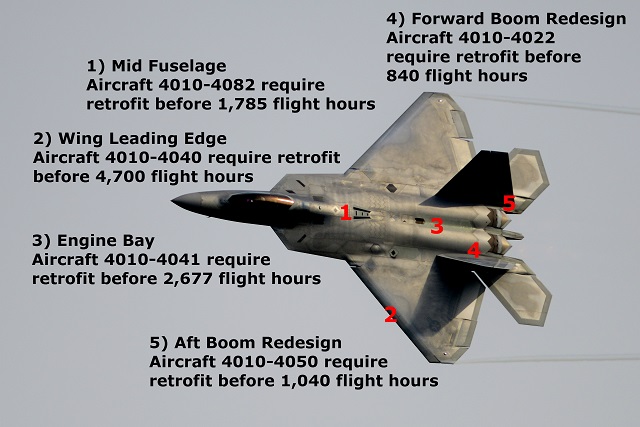 The air force is currently retrofitting nine aircraft at a time, and the process takes an average of 131 days to complete. The report notes that the programme has been stretched out to 2021 because four of the 13 depot lines are being used to repair the stealth coating around the aircraft’s engine inlet, which is a more immediate priority.

Concurrent with SRP and RAMMP, the F-22 is currently undergoing a multi-billion dollar upgrade to the Increment 3.2 configuration, which adds improved data link and automatic ground collision avoidance systems and integrates the latest Raytheon AIM-9X and AIM-120D AMRAAM air-to-air weapons. The aircraft's oxygen system has also been redesigned to prevent pilots from experiencing hypoxia-like symptoms.

There are currently 183 Raptors in the service’s inventory, several hundred fewer than originally planned. The programme was riddled with technical issues, and cost growth and poor schedule performance eventually led to its cancellation in 2010.

The Government Accountability Office reported in 2014 that the combined cost of F-22 modernisation is $11.3 billion. More than 60% of that total has been spent since 2003. 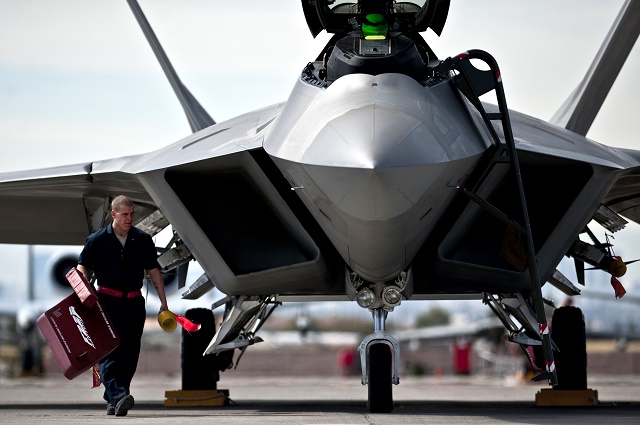