The increasingly cluttered warzone in Syria and the recent shoot down of a Russian Su-24 fighter-bomber by Turkey underscore the need for deeper interoperability, deconfliction and coordination between coalition fighters, according to US Air Force’s top general.

The USA, UK and France have assembled their premiere fighters at Langley AFB for a rare high-end training exercise, which tested interoperability between the fourth and fifth-generation jets.

USAF F-22s have been flying alongside RAF Typhoons and French Air Force Rafales against F-15E Strike Eagles in a two-week deployment that began last week. 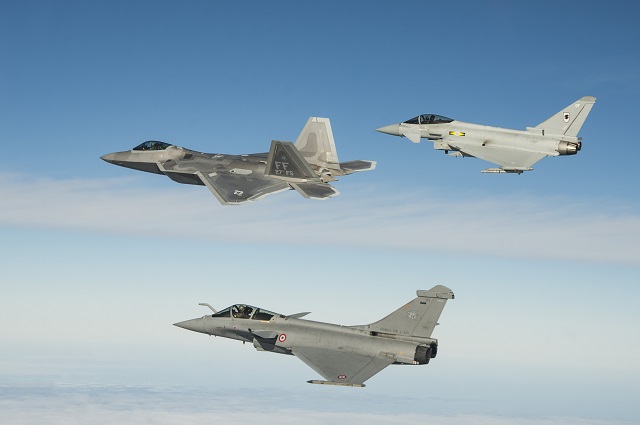 “The same kind of deconfliction and communication process that’s being used here is in place in the Middle East,” explained USAF chief of the staff Gen Mark Welsh at a press conference at the base yesterday. “Our air forces there do a lot of work to try and stay in communication so there is less chance for miscommunication or confusion that leads to mistakes or bad decisions.”

The inaugural Trilateral Exercise has been designed to test fighter pilots in realistic “full-spectrum” combat scenarios against advanced air and ground threats with support from combat rescue helicopters and airborne warning and control aircraft.

With relative air superiority in the most recent coalition campaigns in Iraq, Afghanistan and now in Syria against the Islamic State terrorist group, air-to-air engagements remain a real possibility.

That risk was brought to the fore last month when a Turkish F-16 using a Raytheon AIM-9X Sidewinder destroyed a Russian Su-24 for allegedly straying into Turkish airspace.

“It’s a dangerous business. Don’t cross somebody’s border without permission,” Welsh says of the deadly incident. “Any time there are a number of forces operating in close proximity, there is the potential for errors and mistakes and bad things that happen. It’s an ugly environment any time you’re actually conducting combat operations, so people must coordinate and cooperate to do it properly.”

American’s top air superiority fighter, the Lockheed Martin F-22 has trouble communicating with other aircraft including the F-35, and relies on voice radios to relay battlespace information. It can receive but not transmit information via Link 16.

US Air Combat Command datalink and aerial networking requirements official Lt Col Scott Hamilton says it could take another five or six years before the F-22 is modified to join Link 16 networks. As the most common coalition datalink, Hamilton recommended more investment in Link 16 infrastructure modernisation by both American and coalition air forces.

An F-22 taxis past a lineup of RAF Typhoons at Langley AFB.