The US Air Force has for the first time successfully test fired a Raytheon AIM-9X passive infrared missile from a Lockheed Martin F-35A over the Pacific Sea Test Range.

According to a statement from Edwards AFB, the 461st Flight Test Squadron’s AF-1 flight sciences aircraft fired the short-range weapon on 12 January at an altitude of 6,000ft. 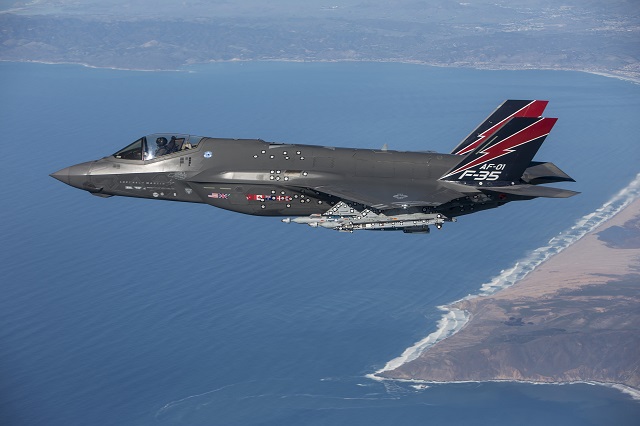 The test firing moves integration of the AIM-9X forward, with introduction across the F-35 fleet expected in Block 3F in 2017. Block 2B and 3i aircraft carry only the basic complement of GPS- and laser-guided bombs and Raytheon's medium-range AIM-120C.

Approval has also been granted by the US Navy for full-rate production of the latest AIM-9X Block II version, adding a new electronics package and datalink for lock-on-after-release engagements.

Meant for close-in kills at high off-boresight angles, the AIM-9X is a heat-seeking alternative to the radar-guided Raytheon AIM-120 AMRAAM, which is susceptible to advanced electronic countermeasures, such as digital radio frequency memory jammers.

The F-35 is designed to carry two AIM-9X missiles on its wings and four AIM-120s internally.

The navy wanted to extend the range of the AIM-9X by 60% under a Block III programme for beyond-visual-range engagements, but the project was cancelled in the fiscal year 2016 budget, with only an “insensitive munitions warhead” side project carried forward.

The air force has said that these small self-protection munitions could be a bridging capability as it develops 360° laser shields for future fighters and bombers, targeted for rollout in the late 2020s.

“The MSDM will support miniaturised weapon capabilities for air superiority by enabling close-in platform self-defence and penetration into contested anti-access/area denial environments with little to no impact to payload capacity.”