The F-35 Lightning II might be the most sophisticated combat jet on the market today, but US programme officials and lawmakers worry that the fifth-generation stealth aircraft is losing the battle for hearts and minds.

That acknowledgement within the Pentagon and among the international partners has already seen the US Air Force establish an F-35 Heritage Flight Team that will fly at 14 events this year, with shows booked in cities from New York to Las Vegas.

The public relations battle is being waged abroad, with the Royal Netherlands Air Force planning to bring its two F-35A home in June “so that they can tell their story”. The first eight of the nation's 37 stealthy F-16 replacements aren’t formally due to arrive until 2019 with the establishment of the first domestic base.

American and British F-35s will also be attending the UK’s Royal International Air Tattoo and Farnborough Airshow in July.

US airpower past, present and future (F-35, F-22, F-16 and F-86) fly in formation during a during a heritage flight conference at Davis Monthan AFB, Arizona in March

“I have never been associated with a programme in my 25-plus years of acquisition where the public perception and the reality are so different,” F-35 chief Lt Gen Christopher Bogdan said at the House Armed Services Committee’s annual Joint Strike Fighter (JSF) hearing on 23 March. “Part of that is our problem for not telling the story, but part of it is because the programme is so big, every minor issue becomes a big issue.

“It’s difficult to explain to the public how air warfare is changing, and how it is not a turn-and-burn airplane that looks really cool at an airshow that's going to win the fight for the United States when we go into combat in the next 20 or 30 years. We do have a perception problem and we do have an information gap there.”

Even in the Wright brothers’ home town of Dayton, Ohio, Americans are apparently turning their backs on the F-35, according to a recent online poll perfomred by the University of Maryland, which was reported in the Dayton Daily News. The headline "Ohio voters favour cancelling jet fighter" riled local congressman Michael Turner, who asked Bogdan at the hearing why the reputation of next-generation replacement for the A-10, F-16, AV-8B and F/A-18 is so poor, even though it has generally kept within revised 2010 cost and schedule parameters.

“I shouldn't be necessarily a salesman for the F-35; you need me to be a little more balanced than that,” says Bogdan. “But, for our warfighters, there's clearly a role for them to play in advocating for this airplane. In the past, we haven't done a great job of that simply because the airplane was immature, we were only operating at a number of locations and we're still developing it.” 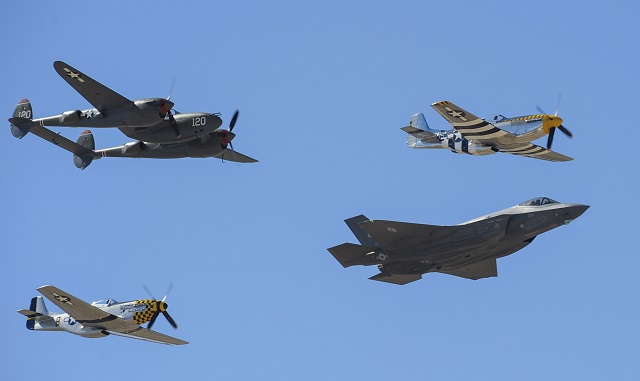 F-35 flies in formation with its namesake, the P-38 Lightning, and two P-51 Mustangs

The aircraft's value is also being questioned Down Under, where the Australian Senate is leading an inquiry into the planned acquisition of up to 72 conventional A-models. The inquiry will report its findings on 29 June.

Royal Australian Air Force (RAAF) F-35s will begin arriving home in 2018 and the first operational squadron will be stood up by 2021.

In its written submission to the inquiry, think-tank Air Power Australia states contends that senior defence officials have “chosen to wilfully ignore the immense advances in competing Russian and Chinese-built capabilities” when picking the F-35, causing “the single biggest defence planning failure in Australian history”.

In its submission, Lockheed Martin talked up the industrial benefits of the F-35, with more than $554 million in contracts awarded to Australian firms.

The Australian Department of Defence states in its submission that the F-35 remains “the most capable and cost-effective solution for Australia’s future air combat requirements”, even at a cost of AUS$17.8 billion for 72 jets, based on current exchange rates. Another AUS$4.6 billion has been approved for operations and support through budget year 2024/2025. 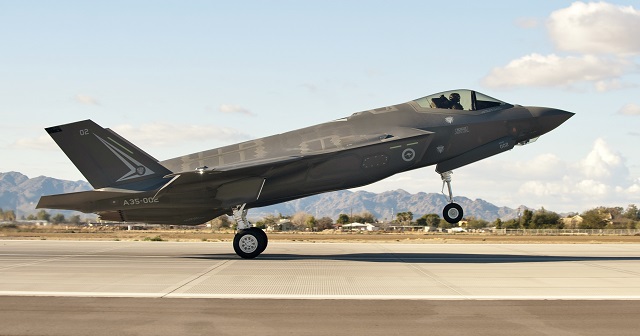