Gen Joseph Dunford, Marine Corps commandant,has been briefed on the readiness of the first combat-coded F-35B squadron and could deliver an IOC decision any day.

The operational readiness inspection wrapped up 17 July, and the results have been reported up the chain of command to the commandant, the Marines tell Flightglobal. The squadron was rated on its pilot and maintainer courses, maintenance depot, simulator flights, and operational flights in five core mission areas.

“The CMC will make a decision as to whether the F-35B is ready for IOC based on the inspection team's findings and [deputy commandant for aviation Lt Gen Jon Davis’] recommendations,” says Greenberg. “We expect a decision before the end of July.”

VMFA-121 based in Yuma, Arizona will declare IOC with 10 operational F-35Bs. If the commandant declares IOC, the squadron could potentially be called up to fight, although its first regular overseas deployment isn’t scheduled until 2017.

The milestone would come 14 years and many billions of dollars after Lockheed Martin began developing the fifth-generation jet, which has the unfortunate honour of being the most expensive weapons purchase in history. 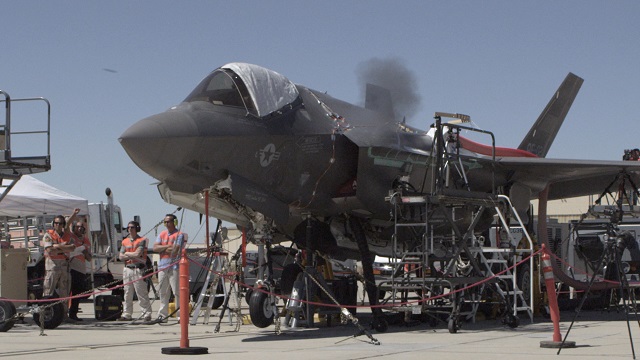 An F-35A, tail number AF-2, fires a burst of rounds down range at the Gun Harmonizing Range 17 July.

Meanwhile at Edwards AFB in California, USAF weapons testers have begun firing the F-35A’s gun system. The four-barrel General Dynamics GAU-22/A is carried internally on the A-model F-35 but is carried externally on the B- and C-models flown by the Marine Corps and Navy.

The air force said in a press statement that the testing began 9 June with shots fired from the AF-2 flight sciences aircraft at the Edwards Gun Harmonising Range. Ground testing should wrap up in August before an airborne trial in late September, the service says.

The gun is an improved version of the GAU-12 carried on the AV-8B Harrier Jump Jet and fires larger-calibre rounds than the 20mm guns on the F-16 Falcon, F-15C Eagle and F-15E Strike Eagle.

The tests are designed to make sure the gun system works properly and that aircraft itself can handle the stresses. Flight testing with a line production aircraft will take place next year for full integration. 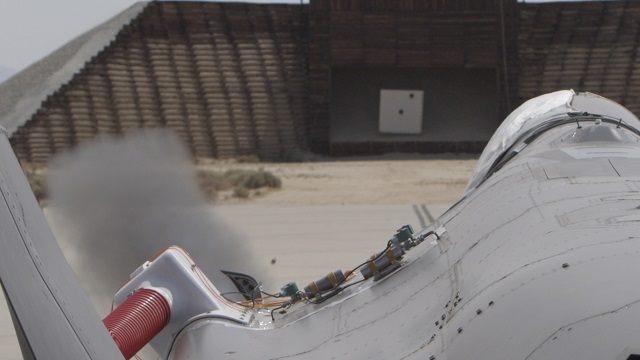