It takes 2,590 military personnel, government civilians and full-time equivalent contractors and $70 million per year to run the world’s largest and most expensive military aircraft programme, the F-35 Joint Strike Fighter.

That’s according to the US Defense Department's F-35 chief Lt Gen Christopher Bogdan, who disclosed the staff count and annual budget of the F-35 Joint Programme Office (JPO) at a congressional hearing about the $379 billion fighter procurement this week.

Headquartered near the Pentagon in Arlington, Virginia, the JPO is managing the acquisition of 2,443 aircraft for the US military services as well as hundreds more for the UK, Italy, the Netherlands, Turkey, Australia, Norway, Denmark, Canada, Israel, Japan and South Korea.

The acquisition has almost doubled in cost since the F-35 development contract was awarded to the fighter jet's manufacturer Lockheed Martin in October 2001. To date, 179 aircraft have been delivered compared to the 1,013 that were forecast 15 years ago.

The JPO staffing numbers were requested by US Senate Armed Services Committee chairman Senator John McCain, an outspoken F-35 critic, who said at the hearing on 26 April that the programme's record of performance “has been both a scandal and a tragedy”.

“The information that I have is it's nearly 3,000 [staff] and the cost is $300 million a year. But $70 million a year to run an office is pretty disturbing,” McCain said in response the JPO numbers. That $70 million per year pays for salaries, office space, computers, IT support and other costs.

Asked after the hearing if that was an appropriate staffing level and budget for a programme of the F-35’s magnitude, Bogdan said: “I don’t know if that’s enough or not, or if it’s too much. It’s what we have.

“You ought to look at the F-35 numbers and remember that we’re building three variants for 14 customers, so maybe it’s not a bad size for three programme offices,” he adds, referring to the aircraft’s three variants, which are just 20-25% common compared to the 70-90% commonality expected at the start of the programme.

“I think the difference between the number Senator McCain mentioned, at least on the dollar side, is the bill for navy and air force civilians and military personnel. [That bill] doesn’t come to me.”

The Pentagon's annual tab for the F-35 is expected to average $13 billion over the next 22 years, according to the US Government Accountability Office (GAO). Its last aircraft will arrive by 2040 and the type will remain in service through 2070.

Lockheed delivered just six aircraft in the between January and March, which is slightly lower than expected because of the transition between production lots, the company disclosed on 26 April in its first quarter earnings results. The company says it remains on track to deliver 53 aircraft as planned this year. 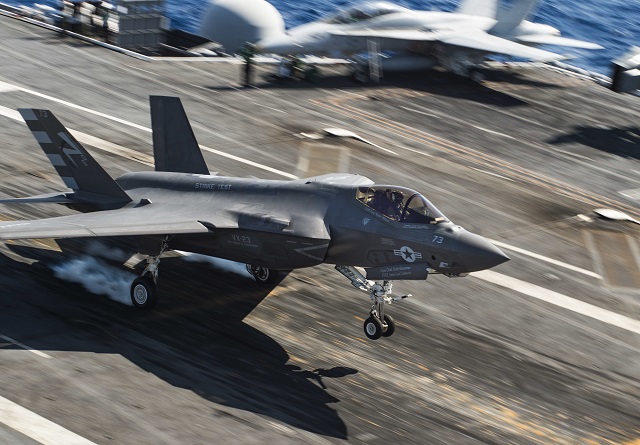