With an initial operational capability declaration imminent, the Lockheed Martin F-35A marked its first air-to-air kill during a flight test after launching infrared- and radar-guided missiles at subscale target drones, the US Air Force announced 1 August.

On 28 July, the pilot of the AF-3 test aircraft declared “Boola Boola,” the traditional radio call made when a pilot shoots down a drone, as a Raytheon AIM-9X Sidewinder missile scored a hit on the subscale taret. The fighter identified the drone using its mission system sensors, passed the tracking information to the wing-mounted missile and allowed the pilot to verify the targeting information using the high off-boresight capability on the F-35's Vision Systems helmet mounted display, the service says in the news release.

The F-35 can carry two of the short-range, heat-seeking AIM-9X missiles on its wings. In previous tests, the AIM-9X guided close to the target before self-destructing as part of the test plan. 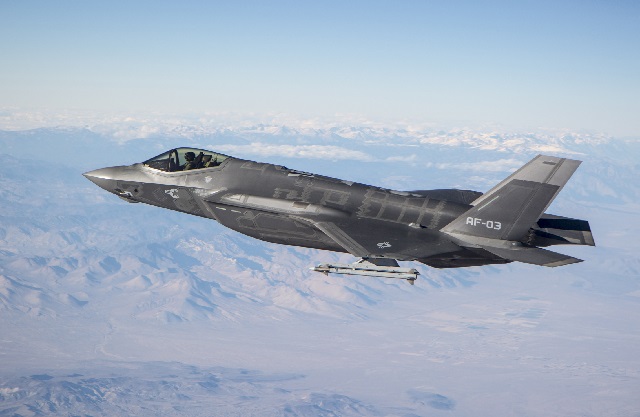 The aircraft also carried an internal Raytheon AIM-120C AMRAAM missile, which the pilot employed on a separate target drone before launching the AIM-9X. The drone was beyond visual range and the AIM-120C was directed as planned to self-destruct before impact.

The AIM-9X test is one of several munitions tests in the F-35 Joint Program Office’s weapons testing surge, which includes small diameter bombs, joint direct attack munitions and AIM-120 testing. The tests will help inform Block 3F software testing, which will bring the aircraft to full combat capability and should begin in January 2018.