NetJets subsidiary Executive Jet Management has received US FAA approval to use an Apple iPad App from Jeppesen as an alternative to paper aeronautical maps, in a precedent-setting move that will set the stage for this portable electronic flight bag (EFB) solution to be rolled out by business and commercial aircraft operators alike.

FAA authorisation came after an intensive three-month in-flight evaluation, which included a successful rapid decompression test on the iPad to 51,000ft (15,555m) and non-interference testing. Executive Jet president Robert Garrymore says the firm was pleased to collaborate with Jeppesen and the FAA on the iPad EFB "and to support the introduction of this technology to the industry". Saying it has "an international focus", Jeppesen has already entered conversation with EASA.

While the firm declines to name other potential customers, it says there are "quite a few operators who are investigating the solution globally". The industry will "hear continued public conversation" about the iPad EFB in the coming months, it adds, and also should not be surprised if "by late summer" an announcement comes from a major airline. 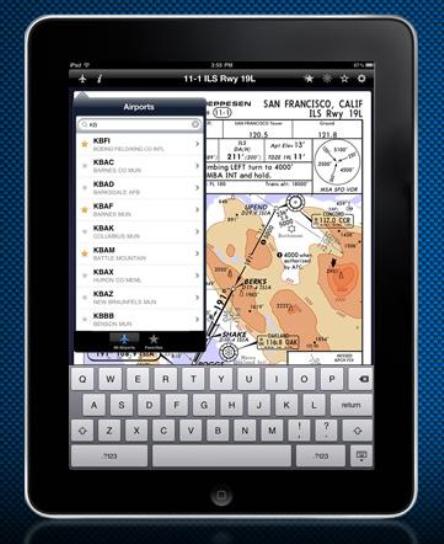 Indeed, information obtained from the Executive Jet evaluation of the Class I iPad EFB will be useful in gaining future authorisation for Class 2 mounted configurations, which are expected to appeal to commercial operators.

"When you look into bigger aircraft, they will probably be looking for a mounted solution, where the pilot doesn't want to have a kneeboard. It depends on the operation, the type of aircraft being flown and the space available in the flight deck for what the optimal solution is for each carrier," says Buhl.

Exploring how in-flight connectivity can add a real-time element to the iPad EFB is also on Jeppesen's agenda. "We think that is something that is extremely interesting as well," says Buhl

Meanwhile, the introduction of the iPad 2, Apple's second iteration of the hugely-popular tablet, is expected to drive further interest in the iPad-as-EFB solution. The new, slimmer, lighter iPad "will have a huge impact on aviation", predicts Jeppesen, noting that the paperless solution replaces some "70lbs carried around for full flight bags for charts".