Arianespace chief executive Jean-Yves Le Gall joined the space industry in 1993 as managing director of Novespace and became deputy managing director of CNES, the French space agency in 1996. He arrived at Arianespace in 2001 after leading its subsidiary, Starsem which he joined from CNES in 1998. He talks to Tim Furniss about the challenges facing the company. 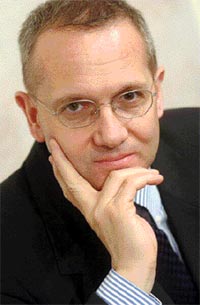 Q: Your relatively recent arrival at Arianespace has coincided with the loss of the Ariane 5-ECA and dramatic changes to the French space industry. Can you place this into a personal and business perspective?

A: When you take a position in any kind of circumstances, it is always very challenging. You take the pluses with the minuses; you take the ups and downs. I must admit that when I started there were some downs. What is challenging, is changing the downs for the ups and this is what we are doing. I hope that with the recent decisions by the European Space Agency this will be the trend.

A: We are facing three main crises. The first is in the worldwide telecommunications satellite marketplace, which is now very weak. Three years ago there were 30 spacecraft to launch worldwide, this year I do not expect there to be any more than 10.

The second crisis is about the competition. Boeing and Lockheed Martin have organised themselves to market a range of launch vehicles to meet the requirements of the market and they have a new fleet of proven launchers, the Delta IV and Atlas V. The third crisis is of a technical nature: the failure of the ECA in December.

Q: How are you going to recover from these?

A: We have begun the Ariane 5 recovery programme which will focus on the ECA and its return to flight and we are restructuring our marketing so that we are in a better position to compete with Boeing Launch Systems (BLS) and the Lockheed Martin-led International Launch Services (ILS). These companies are better subsidised in that they have many more government launches to make than Arianespace has.

The structure of the European launchers business is being reorganised so that there will be one prime contractor, EADS, working with the European Space Agency and with Arianespace which will concentrate on marketing and launch operations at Kourou.

A: Yes, we did have a plan to phase out the 5G but also a contingency that if the ECA failed, we would order some more 5Gs, which we did. I should also add that the budgetary situation and the market conditions have changed and the ECB has been postponed but not cancelled. I think the ECB will fly by the end of the decade.

Q: Would it not have been more cost effective to order some more highly-reliable Ariane 4s?

A: No, definitely not. Ariane 4 was certainly very successful but it was also highly costly per kilo in orbit: twice the cost of an Ariane 5.

The marketplace has also changed and even the Ariane 44L, the most powerful version, would not be able to fly some of the larger communications satellites, two of which will be able to be carried on the Ariane 5. In my opinion, this was the right decision.

Q: How many Ariane 5Gs are left and how many new 5Gs have been ordered as a result of the ECA accident? What is the difference between the 5G and the 5G-Plus and how many of each are in the inventory and under order respectively?

Incidentally, the names 5G and 5G-Plus refer to the same vehicle: 5G stands for 5Generic. There are just some very minor differences in components on the 5G-Plus, such differences in electrical systems and things like that. Four more 5Gs have also been ordered and in June, we will be ordering 30 more Ariane 5s, probably 5 5Gs and 25 ECAs, with the first operational commercial ECA being launched in 2005.

Q: What are the plans for the return of the ECA? Presumably some demonstration flights of the ECA with the new Vulcain 2 nozzle will have to be made first? Any details regarding flights and payloads?

A: There will be two Vulcain 2 powered Ariane 5 launches in 2004, one to demonstrate the redesigned engine [that failed on the first flight in December 2002] carrying a dummy payload to introduce the ECA for commercial launches in 2005, and the other one using a different upper stage, to carry the first ESA Automated Transfer Vehicle (ATV) to the International Space Station.

Q: Given the state of the launch market and the predicted demand for launchers of LEO payloads after the collapse of the "mobile phone sats" market, are you convinced that the Vega will be sustainable? Won't the Soyuz and Vega be competing head-to-head from Kourou in 2006, when the Soyuz and the Vega pads will be operational?

A: There will be a niche market for Vega for the launch mainly of the many small Earth observation and military satellites being planned, while the Soyuz would be a multipurpose launcher for mid-size ESA science satellites and small communications satellites for flights to geostationary transfer orbit complementing Ariane 5 dual-launch capability and sometimes freeing it from launching smaller comsats.

Then of course there is the Galileo navigation satellite programme which will require launches starting in 2005. With Vega, Soyuz and Ariane 5, Arianespace is starting a new era of its life, offering a range of vehicles covering all market needs and allowing our company to continue to offer the best launch services in the world.