For the aviation industry to substantially reduce or eliminate its carbon dioxide (CO2) emissions, it will take a revolution in aircraft propulsion technology. However, near-term reductions in airliner emissions will likely take a more evolutionary approach that relies on augmenting existing technologies.

That is the conclusion reached by a group of aerospace technology experts brought together by FlightGlobal during the FIA Connect virtual Farnborough air show. The webinar was presented in association with Raytheon Technologies.

Reducing CO2 emissions will not be done with “either/or” choices, says Frank Preli, Pratt & Whitney vice-president for propulsion and materials. There are, says Preli, near-term options for improving emissions and these need to be pursued.

He notes that evolutionary changes to jet engines have reduced fuel burn 70% since the days of the Boeing 707. Longer term, he says, more revolutionary solutions involving new fuels including hydrogen and combustion cycles may prove effective, but they are inherently higher risk if they require a new way of integrating the powerplant with the aircraft or demand dedicated infrastructure, so will only come to fruition with “more commitment from more parties”. 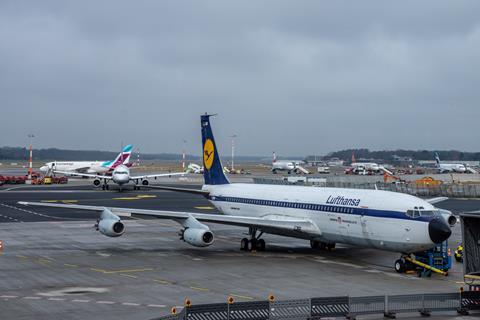 On the progression to sustainable flying, hydrocarbon fuels will remain predominant “for the foreseeable future”, so it is critical that Rolls-Royce and other industry leaders continue working to improve today’s principal technology, says Mekhiche.

Lastly, he says, will come electrification - which will be the revolution.

Still, there could be another approach, says Gene Holloway, chief sustainability officer at supersonic business jet developer Aerion. His company’s plan is to be carbon neutral: “We see it as a counterbalancing.”

Aerion intends to offset emissions from its aircraft by seeking reductions elsewhere, including through a focus on carbon capture and storage. Holloway points to Aerion’s recent tie-up with Carbon Engineering, a Canadian company developing a synthetic fuel derived from CO2 pulled out of the atmosphere.

CO2 removed from the atmosphere could either be turned into jet fuel or, notes Holloway, it could simply be stored, offsetting CO2 generated by combustion of standard hydrocarbon fuel. But ultimately, he says, Aerion’s “30- to 40-year strategic plan” is to move away from hydrocarbons and to fly on “100% synthetic fuel”.

Henrik Runnemalm, vice president of engine systems at GKN Aerospace Engine Systems, adds that the quandary faced by aerospace companies is to deliver solutions which are effective, safe, competitive and socially acceptable - all at once. “We see that impact right now, we are affected heavily by what’s happening around us. That’s an element we also have to bear with us as we come up with solutions.”

But getting there will require the sector pursue two tracks: developing small, all-electric aircraft, while also equipping turbine-powered airliners with additional electric systems.

Such aircraft will help “establish a global model to sustain those products in the field… and demonstrate value”, Mekhiche adds.

Such systems can include “second power sources” to supplement turbofans. Or, “making a more-electric engine that then provides enough electric power… to electrify secondary functions” such as environmental control systems, Mekhiche says. “Working these two in parallel is key.”

P&W has studied similar improvements.“What if I put a motor generator on each spool?” says P&W’s Preli. “I can start to alter how I operate that engine, to either make it more efficient, or to give it better surge margin, or to reduce some of the complexity in the compressor.”

Several of the experts believe smaller companies and start-ups will be prime drivers of next-generation technologies.

“You have to have these very disruptive entrants to help… upset the apple cart… To get to the next stage,” says Aerion’s Holloway.

“For an old business, it’s really important to be open and collaborative” with both academics and “smaller companies coming [with] new ideas”, adds GKN’s Runnemalm.