The system, called Leonidas, is to be sold as part of a suite of counter-UAV weapons, Northrop said on 22 July. 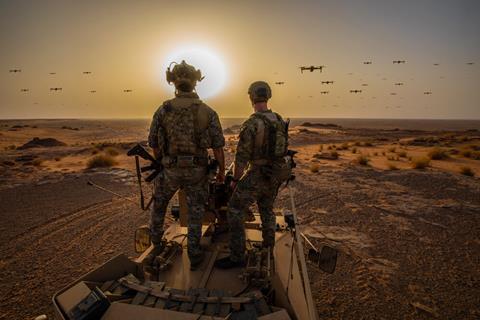 “Our gallium nitride semiconductors provide unmatched power densities that are constantly monitored and optimised by artificial intelligence in real-time,” the start-up says. “Leonidas creates an [electromagnetic pulse] that can be steered for precision engagements, or adjusted to sanitise a volume of terrain or sky, creating a force field effect.”

The electromagnetic pulse weapon can also be used at short range to disable the electronics of cars, for instance, to stop a convoy of military vehicles without using kinetic weapons, such as guns or missiles.

The DoD plans to spend at least $404 million on counter-UAV research and development and at least $83 million on counter-UAV system procurement in fiscal year 2021. The spending is in response to the loitering munitions attack on the Saudi Aramco oil processing facilities at Abqaiq and Khurais in September 2019, as well as experience with Islamic State of Iraq and the Levant turning hobbyist quadcopters into improvised explosive devices in Syria and Iraq in recent years.