The Farnborough debut of Boeing’s latest 787 derivative has enabled details of the aircraft’s aerodynamic advances to be examined close up.

The 787-9 is the first Boeing airliner to be equipped with hybrid laminar-flow control (HLFC), which is a feature of its fin and tailplane. This drag-reducing aerodynamic technology looks set to become standard on all future Boeing products, as it will also equip the 787-10 and 777X family.

Boeing is reluctant to talk much about the system and will not disclose how much benefit it delivers, saying only that it is “significant”. The manufacturer does, however, confirm that the system uses suction to delay the transition of the airflow boundary layer from laminar flow into turbulent flow.

“Both Airbus and Boeing have been working on that for decades and I think Boeing has finally found the ingredients to the ‘secret sauce’ to make that work,” 787 deputy chief project engineer on 787 derivative development, Ed Petkus told Flightglobal earlier this year.

While HLFC is incorporated into the 787-10, there is “no firm plan” to introduce it on the -8, according to Mark Jenks, vice-president of 787 development. “We certainly could. There’s a business case we have to run - it’s a function of how many more -8s are we going to build and the detail cost to put it on.”

As these images comparing the 787-8 and -9 show, the only discernible pieces of the HLFC system are the small doors inboard on the underside of each tailplane and either side of the fin. Flightglobal understands that these panels have two sets of hinges allowing them to tilt both ways like saloon bar doors. The system then generates suction to maintain the laminar flow.

Another interesting feature of the 787-9 is its high-lift system, which has been adapted from the 787-8 to cater for higher operating weights. Although the wing’s planform and flaps are identical to the -8, the -9 is offered with three additional flap settings (10, 17 and 18), meaning that there are a total of nine positions (excluding “up”), compared with six on the 787-8 (see image below). 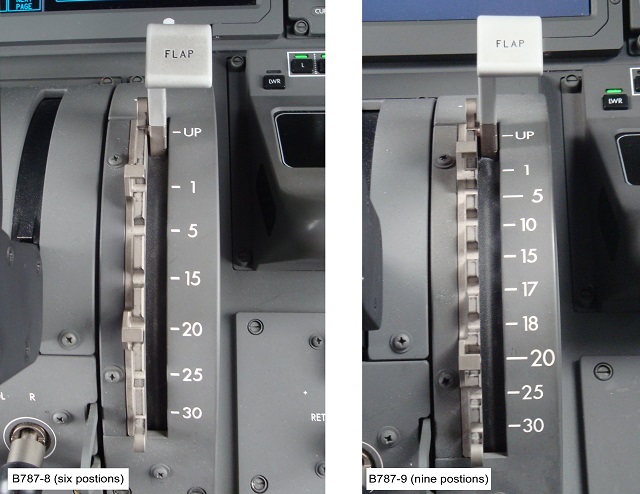