Remaking the smallest version of the 737 Max family to carry more passengers and fly further presents three options: Shrink the larger 737-8, stretch the smaller 737-7 or combine elements of both.

In the end, Boeing decided to stretch the 737-7 by two seat rows and added major elements of the 737-8 in the first major tweak to the 737 Max line-up more than five years after launching the programme.

In a sign of the shifting dynamics in the single-aisle market, the 737-7 has attracted just 60 aircraft orders from three customers, giving the formerly 126-seat variant less than 2% of overall backlog for the three-member 737 Max family. The original version of the aircraft, the 737-300 Classic, outsold two larger sister variants by a wide margin. Airlines demanded more capacity after the 737NG family was introduced in 1998, but the 737-700 still claimed a respectable 17% share of the overall backlog.

If there is good news for the 737-7 backlog, it is that Boeing’s primary competitors have not done much better at the small end of the single-aisle market segment. Bombardier has gained 247 firm orders for the 135-seat CS300 since 2008, while Airbus picked up 58 orders for the re-engined A319neo. In an overall market segment from 120-240 seats with more than 8,000 aircraft on backlog, a total orderbook of 465 aircraft on firm order doesn’t appear encouraging. 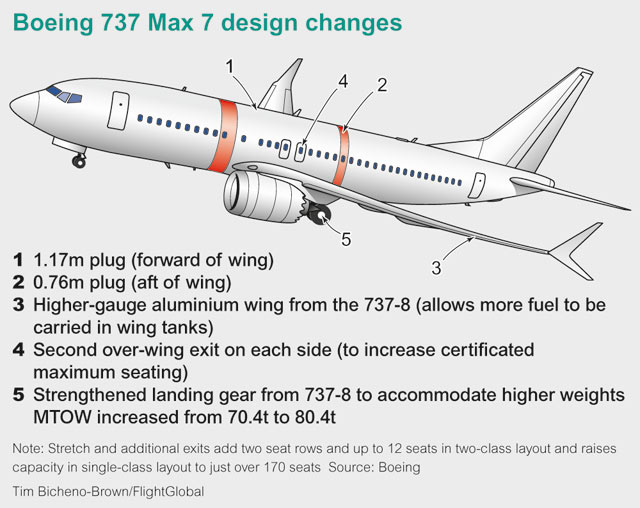 Boeing does not expect the addition of up to 12 more seats in a typical two-class seating configuration to significantly drive new demand into the low end of the single-aisle sector. The move appears to be driven by Boeing’s attempt to satisfy new requirements imposed by the 737-7’s two largest customers: Southwest and WestJet.

“We have now assessed the market. The customers have said that a bigger airplane is something we would like with that range,” says Keith Leverkuhn, vice-president and general manager for the 737.

The redesign also happens to answer Boeing Business Jets’ long-term search in the VIP market for an answer to the 7,500nm (13,900km) capability of the Gulfstream G650ER, which dwarfs the 6,100nm range of the 737-700-derived BBJ1. The launch of the BBJ Max 7 at the Farnborough air show fills that need.

Boeing is well acquainted with mixing and matching different versions of the 737 to develop new variants. The 737-800ERX, for example, was developed for the US Navy’s P-8A Poseidon, leveraging a heavily modified version of the 737-800 airframe with the higher-gauge aluminium wing and strengthened landing gear of the 737-900ER.

The same philosophy was adopted for the wing of the new 737-7. The 737-7 and 737-8 share the same wingspan, but the latter has a thicker wing that can carry more fuel. The modified 737-7 wing will have more fuel capacity to compensate for the greater weight of the lengthened fuselage and add 500nm more range, says Leverkuhn. The fuselage itself is lengthened by 1.17m (46in) forward of the wing and 76cm aft of the wing, he says. The maximum take-off weight rises from 70,300kg (155,000lb) to nearly 80,300kg, requiring Boeing to use the strengthened landing gear of the 737-8.

As much as airlines have prized fuel efficiency in new models, extra seats rank as a close runner up. Boeing officials have even taken the rare step of praising Airbus’s decision to add exit doors for the A321neo, allowing airlines to seat up to 240 passengers in a single-class layout. The new 737-7 also follows that example. While the original 737-300 could accommodate up to 149 in a dense, single-aisle configuration, the 737-7 will hold more than 170 in the same lay-out, Leverkuhn says.