As its all-new carbonfibre stablemate, the 787, progresses through its certification plan with relative swiftness, Boeing's 747-8F has faced more challenges through flight-testing that could put its year-end first delivery at risk, just as assembly work begins to accelerate on the passenger version of the venerable jumbo.

RC501, the first 747-8F, departed the same runway as its 747-100 predecessor on 8 February, just one day shy of the 41st anniversary of the venerable jumbo's maiden flight. 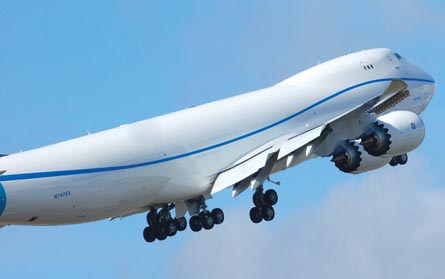 Since that date, Boeing has flown two more 747-8F test aircraft, RC521 and RC522, both destined for Nippon Cargo Airlines, which made their maiden flights on 17 and 14 March, respectively. The company plans to add a fourth flight-test aircraft to the fleet, RC503, the second production aircraft, to bolster the pace of flight hour accumulation.

While RC503 will undergo limited engineering tests, such as high-intensity radio frequency, water spray certification, wake vortex and high-altitude landing and take-off performance in La Paz, Bolivia, the aircraft will also be used for the collection of 1,600h of flight testing and 2,100h of ground testing data.

Jim Albaugh, Boeing Commercial Airplanes chief executive, cautioned at the company's 20 May annual investor conference that the first delivery to launch customer Cargolux will take place by the end of the year, but added: "There's risk to that. Every day we're trying to build contingency, every day we're trying to make sure that we have this airplane in a position where we can deliver it at the end of the year."

Following the first flight of the RC501, it was discovered that the outboard landing gear doors caused a "very apparent" buffet in the inboard flaps at the 30 detent, requiring significant attention to identify and fix the problem. While RC501 pushed through flutter testing, following its 11 March initial airworthiness clearance, RC522 was tasked with troubleshooting the buffet, which risked a costly redesign or an increased approach speed.

While a fix was devised and tested by May, the issue served as a time-consuming exercise that diverted the aircraft away from the certification plan, even as RC501 completed key tests.

The final fix, which resulted in modification of the outboard landing-gear doors, puts the lower panel door more in line with the upper panel, which was once rigged at a 45e_SDgr angle similar to the 747 variants that preceded it.

The modifications also include vortilons on the inboard flap as well as a bullnose design on the leading edge of the upper half of the outboard landing-gear door.

With concurrent flight-test programmes under way, Boeing shifted the 747-8F's base of operations from Boeing Field in Seattle to Palmdale, California, decoupling the certification effort and providing the jumbo freighter with its own dedicated resources.

RC521 and RC522 moved to Palmdale on 9 May and 19 April, respectively. RC521 was later transferred to Victorville, California on 23 May, where it has been undergoing nautical air miles testing to evaluate the fuel performance of the four General Electric GEnx-2B engines, its primary role in the flight-test campaign.

Early indications of the fuel economy of the new engine suggest better than expected performance, although final nautical air miles performance testing continued into late June, say programme sources. Results of the engine performance are expected in the fourth quarter.

Just before nautical air miles testing was set to begin on 31 May, RC521's right outboard - the number four - engine struck a parked airport tug during towing, inflicting serious surface damage to the nacelle requiring repairs before it returned to flying on 6 June.

The US Federal Aviation Administration granted an expanded type inspection authorisation to the 747-8F on 11 June, signalling the formal start to the aircraft's certification campaign.

As the 747-8F looks to the road ahead, the aircraft faces challenges to an on-time delivery, including, say programme sources, addressing a middle envelope structural flutter issue requiring structural dampening or a revised control law, as well as oscillation issues in the inboard ailerons on the new wing caused in the presence of slow pilot inputs and very high hydraulic pressure forces.

Boeing has declined to comment on these issues, saying only: "We expect to have discoveries during the tests and we then address them in due course. This is the nature of testing. It is the fundamental reason why we conduct a thorough flight-test programme."

TAKING SHAPE
As the 747-8F pushes through flight-testing, inside the Everett factory Boeing is progressing with early assembly of its first 747-8I, the 467-passenger version of the jumbo.

Mohammed "Mo" Yahyavi, vice-president and general manager of the 747 programme, aims to have the development of the 747-8I progress smoother than its freighter sibling that is now in flight-testing.

To avoid the issues encountered on the 747-8F, Yahyavi transformed the process for how the engineering drawings are released. The technique, called non-recurring product development, is "nothing special in how you release the drawing". Yahyavi says "the processes are well disciplined. That takes you from the initial definition of the drawing to the final release, step by step. So you know exactly how the drawing is informed and if there are any issues in between these tasks, you would know it right away."

As of 21 June, Yahyavi says the 747-8I airframe engineering team has achieved 100% on-time design release for the previous 76 weeks using this technique, which was honed on the P-8A Poseidon, a programme he left to take the reins of the 747 in February 2009.

Additionally, Yahyavi's engineering team completed 100% design release on the 747-8I in the third week of June, a total of about 10,600 drawings for the new aircraft. Yahyavi says the new technique has been so successful it is being expanded to new development programmes.

Assembly for the new airliner, 5.6m (18ft) longer than the 747-400, began with the arrival of the Section 41 forward fuselage and cockpit from Spirit AeroSystems in Wichita, Kansas.

The 9.6m panels for RC001 that make up the nose and forward upper cabin and flightdeck were loaded into the assembly tool on 14 June, marking the first steps toward assembling the first 747-8I.

Yahyavi says the sections came in with virtually no travelled work and part shortages, and very minimal quality issues, a "major, major improvement" over the same Section 41 for the first 747-8F.

As of late June, RC001's left wing was in major assembly, while the right was in component build-up.

The first 747-8I, the 1,434th 747 to be built, will be one of two flight-test aircraft used in the certification campaign expected to kick off in early 2011, following a January roll-out. The second aircraft, line number 1,435, will eventually be delivered to Lufthansa, which has 20 on order.

First delivery of the 1,436th 747, the first production 747-8I, for a VIP customer believed to be a Middle East head of state, will be handed over to a completion centre for outfitting in the fourth quarter of 2011. Lufthansa expects its first 747-8I in early 2012.