John Edgley, designer and developer of the iconic Optica observation aircraft, is at Farnborough hoping to find a buyer for the three-seat design who can bring the brand back to life.

“This is an opportunity to purchase a unique aircraft programme and get it into production fairly quickly,” says Edgley who acquired the Optica’s jigs, tooling, design rights as well as two aircraft seven years ago from its former owner Aviation Group International.

The deal also included the rights to the FLS Sprint two-seat ab initio trainer, which is also for sale. One of the Opticas - formerly owned by the Spanish government – has been fully restored by Edgley and is on display at the show. “We are using this Optica as a demonstrator. It is proving very popular," he says.

Edgley admits he has "always been passionate about the Optica” which made it first flight in 1979 and entered service six years later. A total of 22 aircraft were built - a 23rd remains unfinished. 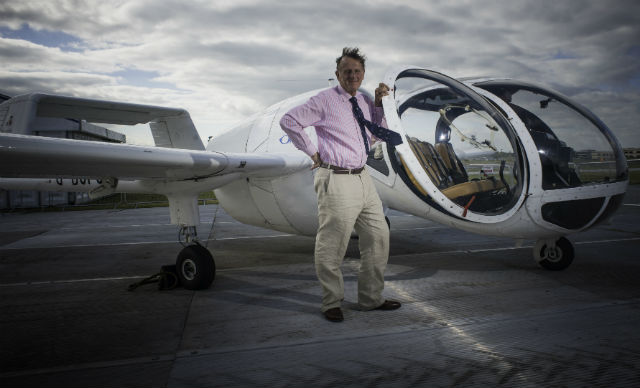 Edgley wants a purchaser to bring Optica back to life

But the programme has a chequered history. Edgley left the company in 1985 shortly after the fatal crash of a police-operated Optica (G-KATY). The company was then acquired by Brooklands Aerospace, but an arson attack at the factory the following year destroyed all but one flying example.

Production ceased in 1990 when Brooklands was declared bankrupt. It then changed hands multiple times, before passing to Edgley’s company Aeroelvira in 2007.

"The time has come to sell it on and I’m hoping to find a buyer who will relaunch production as it still serves a valuable role, especially in the special missions market, such as border and pipeline patrol."

The aluminum Optica has a bubble canopy observation platform, which gives the pilot a perfect field of vision. It has a 1,060km (570nm) range, a cruise speed of 70kt (130km/h) and can fly for up to 8h at a speed suitable for observation. "The only thing that needs updating now is the instrument panel," says Edgley.