Leonardo has introduced a new multi-role variant of its M-346 trainer, which will allow operators to use it as either a trainer or a combat aircraft.

The fighter-trainer variant – or M-346FT – development is approximately 24 months from completion. The key differences in the new variant are the weaponry, a tactical datalink and electronic countermeasures equipment.

Speaking at the Farnborough air show on 10 July, Enrico Scarabotto, chief test pilot, said he expects current customers of the training variant to retrofit their aircraft to the new configuration; namely Israel, Italy and Poland.

A total of 48 aircraft are currently in service with these air forces and Singapore, which operates 12 of the type, Flight Fleets Analyzer shows. The United Arab Emirates also selected the trainer several years ago – and has a requirement for a dual-mode aircraft – while Leonardo is also discussing an acquisition by Taiwan. 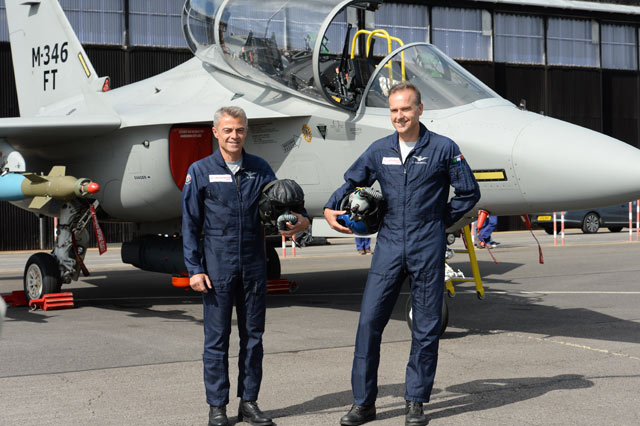 Speaking of the US Air Force’s T-X trainer requirement, Scarabotto says that the request for proposals that was released is “pretty much everything we have” in the M-346.

“There are only very small differences between what we have and what they want for the next 50 years,” he says. “They only want a trainer [but] there is a big request for this dual capability [worldwide].”

Air-to-air missiles, a gun pod, GBU-12 and -49 laser-guided bombs, joint direct attack munitions, and the Raytheon Small Diameter Bomb will all be configurable for use from the aircraft. A reconnaissance pod is also key to the development, and that is already integrated onto the trainer.

The twin-engined design and fly-by-wire controls ensures multiple levels of redundancy, the company says, while the M-346 can be refuelled in-flight for increased endurance.

“The platform has growth potential in terms of sensors and additional weapons,” Scarabotto says.

Meanwhile, the company also revealed that Italy has agreed on the first serial contract for the M-345, which will see five aircraft acquired.

The new trainer is expected to fly this year, and will be certificated and delivered to Rome in 2018, the company says. A dual-role variant of the M-345 is also being considered.