For all its fuel-efficient, re-engined appeal, Boeing has a 737 Max problem. In short, the biggest Max 9 variant is being outsold five-to-one by the Airbus A321neo, which carries about 20 more passengers. This sales gap at the top end of the range has Boeing considering a re-re-engining and a longer aircraft – but while the nearly 50-year-old 737 airframe may have one more stretch left to give, the challenge would stretch Boeing’s engineers – to the max.

But fitting that engine to the aircraft is another matter. In addition to generating more power, the Leap-1A is physically bigger – by 8in (200mm) in the diameter of the fan case. That 8in is on top of the 8in Boeing already had to accommodate to achieve the Max 9 – the Leap-1B itself being 8in wider than the 737NG’s CFM International CFM56-7B. To get from the NG to the Max 9 without bumping the fan case on the ground, Boeing had to raise the nose gear by 6in and raise the nacelle slightly on the wing.

So, to install a new engine with another 8in of fan diameter, Boeing would need to raise the main landing gear by several inches, says 737 Max chief project engineer Michael Teal.

Easier said than done. The main gear of the 737 Max retract into the centreline of the fuselage. The fuselage isn’t getting any wider, so Boeing would have to redesign the gear. As it retracts after take-off, the gear strut would need to telescope inward by several inches to fit into the same space in the fuselage. Upon landing, the extending landing gear would also need to telescope outward before locking into position. 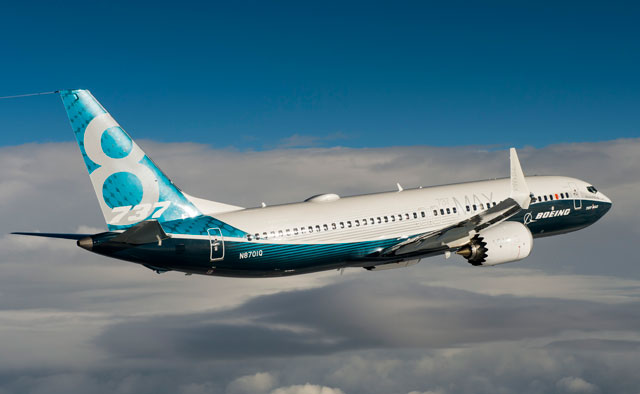 “It would be an engineering challenge, but I don’t think it would be a major deal. You could do it,” Teal says.

It has been done before, but not by Boeing. The supersonic Aérospatiale/BAC Concorde used main landing gear that shortened during the retraction process to fit inside the available space in the storage compartment.

Like the existing 737-900ER, the 737 Max 9 is already 50% longer than the original 737-100 that first flew in 1967. In addition to the landing gear problem imposed by installing larger engines, stretching the 737 one more time would also require Boeing to add a stronger wing.

Boeing launched the 737 Max family of aircraft five years ago with three variants. It now has accumulated more than 3,100 firm orders, but still trails the one-year-older A320neo orderbook by about 1,400 aircraft. The differential is particularly acute in the biggest variants: A321neo orders stand at 1,100, compared to just 210 for the Max 9.

Mike Delaney, Boeing’s head of commercial aeroplane development, offers Airbus rare praise for the A321neo, where updates include new and larger exit doors to allow airlines to install more seats: “They did a great job. I’ll give them credit. The Neo made this a great airplane and they redid the doors, which gave them some seat-count capability. They put this airplane in a good place.”

The changes Boeing made to the 737 to create the Max were even more extensive. In addition to the new engines and a dual-feather winglet, Boeing reshaped the 737’s stubby tail with a smoothly rounded tail cone. The cockpit is updated with 787-like displays, with a newly installed onboard network server feeding data on the health of the connected aircraft systems.

“The reality is these two airplane families are very close, and they just optimise on where they sell,” Delaney says.

Given an equal number of seats, Delaney argues the 737 Max 9 should be more efficient than the A321neo, with the dual-feather winglet providing more effective lift, a lower-thrust engine and a lighter fuselage with less drag-inducing wetted area. “We’re about 5-6% more efficient, but they get something for that longer fuselage. They get more passengers,” Delaney says. More seats lead to more revenue and cuts the per-seat cost of operating the aircraft.