What is beyond doubt is that the rotorcraft industry is having a tough time at present: tightened military spending, mature parapublic markets in the west, and a slumping oil and gas segment – including one of the sector’s big two applying for Chapter 11 bankruptcy protection – have combined to dent confidence and sales. And to add an extra problem, one of the offshore transport industry’s mainstay helicopters is currently grounded following a crash in which 13 people were killed.

However, what appears up for debate is how deep the crisis is, and how close to any sort of recovery the industry may be, given the cyclical nature of the rotorcraft sector.

Of course, that is not to suggest that everything in the garden is rosy. For example, Airbus Helicopters, the market leader in the civil and parapublic segment, saw its orders slip in the first quarter of 2016 to 51, down from 86 in the same period a year earlier, and both revenue and earnings before interest and taxes (EBIT) slid by respective figures of 10% and 30% against the first quarter of 2015.

And at Leonardo Helicopters – essentially what used to be known as AgustaWestland – metrics were down across the board when compared with the previous year. As its three-month results noted: “The performance in the first quarter was affected by the commercial challenges across some civil markets, which involved in particular the production of AW189 and AW139.” With that pair of helicopters occupying weight classes from 6.5t to 8.3t, the issues appear to have been largely generated by the oil and gas market.

Results at the big two in the USA are harder to read: Bell Helicopter saw broadly flat year-on-year revenue and profitability, while overall performance at Sikorsky, in part due to its November 2015 acquisition by Lockheed Martin, is largely opaque. And in both cases, US military spending is a major contributor to the two companies’ bottom lines, helping to insulate them against some of the worst effects of the commercial slump.

But, even faced with those figures, not everything is doom and gloom. Guillaume Faury, chief executive of Airbus Helicopters, notes that “markets are not down everywhere”. He sees Asia and China “doing well” – albeit both represent a smaller percentage of the global total – and representing a market which is “getting bigger and accelerating”.

China is certainly an area of interest for Airbus Helicopters – in early June it sealed an agreement that will see H135s assembled in the country, based on a 100-unit agreement with a consortium of local operators. With emergency medical services “the next big thing” in the country, says Faury, the H135 will be “the light twin of choice for a large number of years, especially with an assembly line in China”. 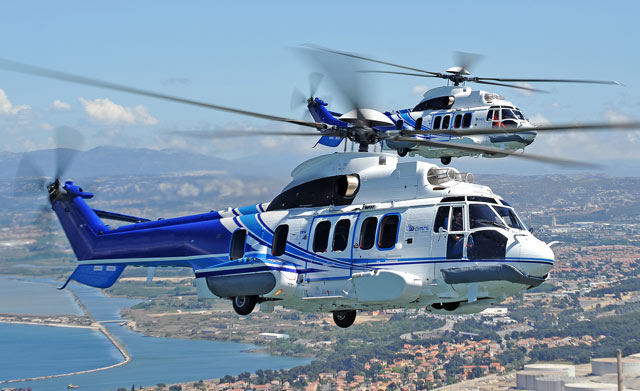 H225s are subject to grounding order after loss in Norway

And assuming all goes to plan, then local production could also be expanded in future, with the light single H125 – formerly the AS350 Squirrel – the most likely candidate, says Faury. There is no “active project” at the moment, he stresses, but is open to discussions with regional governments about possible co-investment on any initiative.

China is clearly assuming an ever-greater importance: Airbus Helicopters forecasts a requirement for 200 civil helicopters per year in China by 2020. “There is very significant growth and we see reasons to believe that this order of magnitude might be possible,” he adds.

Leonardo and Bell have also seen success in China. The former has a framework agreement in place covering the acquisition of up to 60 AgustaWestland AW119Kx light singles, with an initial order for 25 EMS-configured examples placed in March. Bell, meanwhile, has already taken in a letter of intent for 50 examples of its 505 Jet Ranger X light single, while in March 2016 it signed a tentative agreement for 10 525s with a Chinese property firm.

Both helicopters are still in development, with the Turbomeca Arrius 2R-powered Jet Ranger X due for certification shortly. However the timeline on the fly-by-wire-equipped 525 has been thrown into doubt following the 6 July fatal crash of the initial flight-test article. Certification was scheduled for 2017 and two further prototypes of the 9.1t rotorcraft remain, but Bell has yet to give any indication of the likely impact of the accident on its schedule.

The biggest change for the 505, however, has been a recent shift in its main production site. This sees final assembly move from a newly opened facility in Lafayette, Louisiana to Bell’s existing site in Mirabel, Canada where the initial prototypes were built.

Bell has been tight-lipped about its reasons, save to indicate it is making better use of production space throughout the company, but maintains the move will not increase the cost of the 505, which is being keenly priced at around $1 million.

Elsewhere, development activities are continuing at Airbus Helicopters on the medium-class H160. Launched in March 2015, two prototypes have so far amassed 150h, with the majority of flight-test activities currently being performed by PT2 while its sister aircraft is retrofitted with the new Turbomeca Arrano engine. A freeze of the aeromechanical configuration is scheduled for later this year, says Faury.

Service entry is still anticipated for 2018 and the manufacturer is currently in the early stages of setting up the helicopter’s final assembly line at its Marignane, France base. He says the H160 will have “a more robotised system where standards are applied similar to those in other industries like Airbus or the car industry”, noting that the first aircraft will be visible on the line in 2017.

“It is a very exciting phase of the programme,” adds Faury. The H160 has also reached another milestone with Airbus Helicopters beginning to take in early commitments for the type. However, it is keeping names firmly under wraps: “We are not in a hurry [to reveal customers] because we do not count LoIs as orders.

“We are not updating or communicating for each LoI, but what is important is to have LoIs for each of the segments.” But even then, Faury declines to be drawn on whether it has agreements in place beyond those so far revealed for the corporate sector.

At Leonardo, meanwhile, development of its next product, the AW609 civil tiltrotor, remains in limbo following an October 2015 fatal accident involving the programme’s second flying prototype. Flight-test activities had looked likely to resume at some point this year, however the impounding in mid-May of aircraft PT3 by an investigating magistrate in Vercelli has thrown that timeline into doubt. Leonardo insists that it can still meet its service-entry deadline of 2018, but the longer the impounding and the separate probe by Italy’s ANSV air accident investigation branch persist, the more that timeline comes under pressure.

The ANSV has yet to release any details of its investigation, but Leonardo has been stressing since at least March that it understands the reasons for the accident and is confident that the AW609 requires, at most, minor changes to enable it to return to flight.

For Russian Helicopters, notable milestones have been achieved over the last 12 months on two programmes. In late 2015 it obtained certification for the Mil Mi-38 heavy twin, allowing the manufacturer to launch serial production of the 15.6t rotorcraft.

Awarded by Russian federal air transport regulator Rosaviatsiya on 30 December, the approval was achieved using the third and fourth flight-test articles. Both flight-test helicopters are equipped with Klimov TV7-117V engines.

And in late April, first flight was finally achieved of the 6.5t Kamov Ka-62, over two-and-a-half years behind schedule. Russian Helicopters has taken orders for just 12 examples of the Turbomeca Ardiden 3G-engined twin from two customers.

But perhaps the biggest seismic shock to the sector this year was triggered by the tragic events of 29 April when an Airbus Helicopters H225 (LN-OJF) came down on Norway’s west coast.

Thirteen passengers and crew died in the incident after the Super Puma’s main rotor assembly separated from the rest of the helicopter at around 2,000ft as it approached Bergen airport en route from an oil platform.

The crash triggered an immediate restriction from the Norwegian and UK civil aviation regulators, banning the H225 and the older AS332 L2 from offshore transportation.

However, that restriction solidified into a full-scale grounding on 2 June after the European Aviation Safety Agency – following prompting by Norway’s SHT investigation body – issued an emergency airworthiness directive (EAD) related to the helicopter’s gearbox.

Norwegian investigators, it said, had found evidence of metal fatigue and possible spalling – disintegration of the bearing race – in one of the second-stage planet gears in the H225’s epicyclic module.

Faury is understandably stunned by the crash. “It is a terrible accident. The company is really deeply upset by it,” he says.

Assisting the investigation to determine the root cause remains its priority, he says, alongside assisting customers who now have substantial numbers of helicopters grounded. “We are completely dedicated to finding the root cause and then we can start to find solutions and move forward,” he says.

However, regardless of whether or not the blame is eventually pinned on the manufacturer, the damage has been done. North Sea operators had only recently regained trust in Airbus Helicopters following a previous grounding in 2012, again related to the gearbox.

Faury believes it is “too early to say” if there will be lasting reputational damage for the company, however: “People are waiting to understand. There is a large diversity of root causes for such an accident.”

But he concedes it is a “difficult situation” and is “impacting a very important product for Airbus Helicopters”.

However, Faury argues that the manufacturer is more committed than ever to safety. He points out that it has “taken leadership” in HeliOffshore – the pan-industry safety body – as well as launched a number of company initiatives. “We have to work harder on safety in all dimensions. But look at it this way, over the last 15 years we have delivered one out of every two commercial helicopters every year; we are working against statistics.

“But not a single accident is acceptable. We have an increasing determination to bring a contribution to helicopter safety throughout the industry.”