A hunk of yellow scaffolding labelled “scrap” in spray paint sat abandoned outside the 787 aft-body assembly building, no doubt waiting for a few of Boeing’s 8,000 workers in North Charleston, South Carolina to haul it away.

The rickety set of tooling looked well-used, yet it seemed unfamiliar to Mike Bunker, director of operations for Boeing South Carolina.

Perhaps, he guessed, the scrapped tooling once belonged to Vought, the Boeing supplier, now trading by the name Triumph Aerostructures – Vought Aircraft Division. As one of the original six 787 suppliers with design authority, Vought built the first aircraft assembly plant in North Charleston in 2005 to fabricate and join the two composite-skinned aft barrels of the 787, known as Section 47 and 48. Later that year, Global Aeronautica, a joint venture of Vought and Alenia Aeronautica (now Alenia Aermacchi), built an adjoining plant to assemble the 787 mid-body, consisting of sections fabricated by Alenia in Italy and Fuji and Kawasaki in Japan.

Among the many production and design breakdowns that plagued the early days of 787 development and testing, the North Charleston operation stood out as particularly troublesome for Boeing. By 2009, the company was forced to take over the site, buying out Vought and Global Aeronautica’s roles in the programme and assuming full control of the North Charleston plants. After a 57-day strike by Seattle-area machinists, Boeing announced the same year that a second final assembly line for the 787 would be located at the same site; that line opened in 2011.

In five years, the Palmetto State’s final assembly line has delivered more than 100 of the first 400 787s, including, in March, the first “code 1” aircraft, a Boeing designation for a product going to a new customer of the type. The former Vought and Global Aeronautica plants, meanwhile, initially struggled through the early phases of the 787 ramp up but now appear to be staying on track as production rises to 12 aircraft per month. In September, Boeing selected the site to be exclusive assembler of the 787-10, the longest of the three twin-aisle variants due to enter service in 2017. 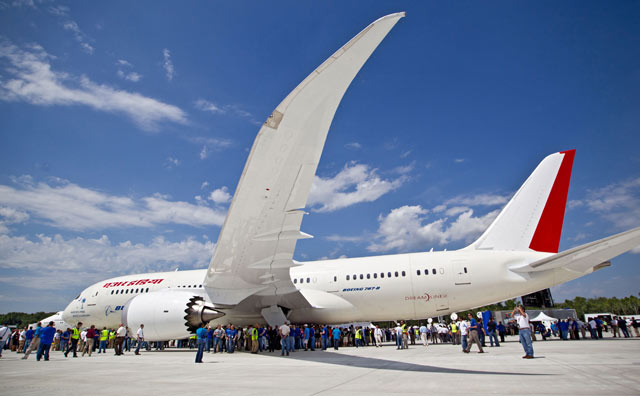 In some ways, however, the legacy of Vought and Global Aeronautica still hasn’t faded from North Charleston. The scrapped tooling left outside the aft section assembly building offers one clue to the structural persistence of the original tenants. Another is the interior of the former Global Aeronautica plant, where the original tooling and lay-out, despite several recent modifications, remain not to Boeing’s liking.

As fast as the 787 ramp-up has moved in North Charleston, parts of the assembly system, especially at the mid-body assembly stage, seem antiquated compared to the lean techniques employed in, for example, Renton, Washington where Boeing assembles 42 737s per month.

“One of our huge opportunities is to continue down the lean path, which takes time,” says Beverly Wyse, vice-president and general manager of Boeing South Carolina.

A big step forward in the transformation of Boeing South Carolina came over the Christmas holiday. On the mid-body assembly line, most workers downed tools for more than two weeks, while a handful of their colleagues reconfigured the tooling stations.

Global Aeronautica had set up mid-body assembly with three parallel lines of five stations each. That provided enough capacity to keep up as overall 787 production rate soared to 10 per month in less than three years. As the 787 programme increased output to 12 per month this year, however, the Global Aeronautica assembly format had to be changed.

Dividing operations between three parallel assembly lines breaks one of the cardinal rules of a Japanese-derived “lean” manufacturing system. In the Japanese model, the goal is to condense all operations into a single line.

“Any time you’re training two lines to do the same job… you’re always working to keep those groups synced up,” Wyse says. Workers on one assembly line will “come up with an idea, but [the others] don’t like it. Now I’m maintaining two build plans.”

Ideally, the mid-body assembling would have been reconfigured from three parallel lines into a single, U-shaped line, with a common build plan subject to continuous refining. Such a design remains an option at the North Charleston plant, but managers chose to start with a half step.

As workers came back from a Christmas holiday, they found mid-body assembly reconfigured from five stations to four. The three parallel lines were eliminated. In the first two assembly cells, where major sections are joined and electronics installed, there are now four parallel assembly lines. As the partially complete mid-bodies exit the second assembly station – Cell 20 – they are funnelled into two parallel lines to complete the last two steps of the assembly process.

But the pressure on simplifying the line will continue. The next step could involve reducing the four stations at Cell 20 to three.

“One of the tactics we’ve used is just to keep putting pressure on, asking, ‘What would it take for you to do this?’” Wyse says. “Whether it’s flow reduction or removing positions, the creativity comes out when you say, ‘how would you do this?' The answer might be, ‘I need a better tool for this.’ Or, ‘Quality would have to be perfect from this supplier.’ And, we say, ‘Well, we should have been working on that anyway. It identifies waste in the system. They’ll say things like, ‘This tool doesn’t drill fast enough.’ So, let’s go see if we can find a faster feed on a drill.”

Final assembly operations at Boeing use standard practices, but with two distinct identities. There is the aggressively lean 737 factory in Renton, Washington, with a common focus on a single family of aircraft. And there is the necessarily slower widebody assembly centre about 60km north near Everett, which supports four different product families.

Boeing’s ideal vision for Boeing South Carolina is to become a hybrid of both worlds, assembling widebodies as in Everett but with the single-minded focus found in Renton. In Everett, 787s are assembled down a single line, running from the back of bay 40-26 to the front. In North Charleston, the 787 is assembled on a single, U-shaped line. Ultimately, if North Charleston can become more efficient, the U-shaped line could be condensed into a single line, as in Everett.

As Boeing strategists ponder the company’s next move after the 777X, such as the mooted “middle of the market” concept, North Charleston may have additional capacity in future to accommodate assembly of another product. Alternatively, Boeing could double 787 output in North Charleston and use the extra space in the 40-26 bay in Everett for other projects.

“Theoretically, if you wanted to tool another line, yes, you could double the rate capacity,” Wyse says. “We don’t have any plans for that right now, but, yes, that conceivably could work.”

Another major difference in Boeing’s identity in North Charleston is the absence of unions. The International Association of Machinists (IAM) once represented Vought’s workforce in North Charleston. Following Boeing’s acquisition of Vought’s 787 interests, the North Charleston workers voted to decertify the union. The IAM mounted another attempt to organise Boeing workers in North Charleston in 2014, but abandoned the campaign after complaining of intimidation tactics, including violent threats against recruiters.

In Everett, union rules dictate firm boundaries between work that can be performed by machinists and engineers. The absence of those rules in North Charleston have allowed for greater flexibility — and Boeing has exploited it.

In the aft-body assembly plant, Boeing uses five automated fibre placement machines to construction Section 47 and 48, the two aft-most barrels of the 787. After the composite sections are complete, the next step is drill holes and place thousands of fasteners into the structures. In the past, most of the drilling was done by single machines made by Broetje Automation, a Dutch robotics firm.

In recent months, however, Boeing has consolidated the Broetje robots on drilling and fastening operations on Section 47. For the more complex shape of Section 48, Boeing has replaced the Broetje machine with the “Quad-Bot”, made by Electroimpact, based in Mulkiteo, Washington. The Quad-Bot is four independent robots that work simultaneously and in unison to drill and fasten a single structure.

The concept was designed by engineers at the adjacent Boeing Research and Technology campus in North Charleston and implemented by Electroimpact in the factory. Due to the absence of union rules, Boeing engineers and workers work on the new robotic system together. In the early days, this approach allows engineers to understand problems and implement fixes faster, Boeing says.

“We find that when you put them in that environment and say, ‘Help solve this problem’, that hands-on experience brings the creativity out like nothing else,” Wyse says. “We’re also seeing the engineers come out of it with a much better understanding of the limitations of their designs.”