Speaking at the show, Swedish air force chief Maj Gen Mats Helgesson explained what the addition means for the nation. “The Meteor is the most lethal radar-guided air-to-air missile in operational service in the world, and we are the only operational user so far. Combined with the short-range [Diehl] IRST heat-seeking missile, we have the best air-to-air weaponry you can find in the world. That means a lot to our air defence.”

Helgesson says that after extensive testing by Sweden's FMV defence procurement agency and the air force's Gripen operational test and evaluation unit at Linköping, "All of the new MS20 functions – including the Meteor missile – are now integrated. Version 20 is a big and comprehensive upgrade of the Gripen system, which also includes the GBU-39 Small Diameter Bomb, full implementation of Link 16 and with the upgraded radar these are all important advances for the Gripen.” 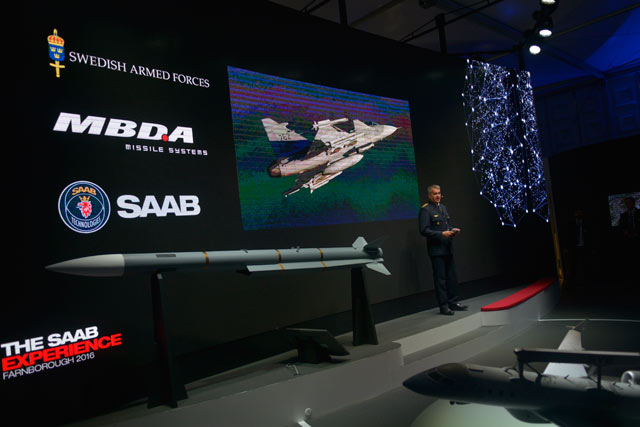 While Meteor is currently in the initial operational clearance phase, the missile is now fully integrated with the Swedish fighter, leaving the air force to concentrate on practising and developing new tactics and determining how best to use it from an operational perspective. The weapon is expected to achieve full operating capability with the Gripen late next year.

The Swedish air force has since 1 January had six Gripen squadrons on quick reaction alert (QRA), including two previously dedicated to its F7 Wing at Såtenäs air base for training.

Speaking at a roll-out event for the service's future Gripen E last month, Helgesson said: “we now use all our fighter squadrons to rotate the QRA, at Ronneby, Luleå-Kallax and Såtenäs, as well as reserve bases at Upsalla and Visby.” He would not be drawn on whether Meteor was yet being used in this capacity.

“Meteor is the best example of Europe doing things together," says Saab chief executive Håkan Buskhe. "It’s a big leap forward in these rather newer [more hostile] times, and allows us not only to defend our nations better, but also at an affordable cost.”