Four months after the Embraer KC-390’s first flight in February 2015, Embraer finally acknowledged the aircraft had still not attempted a second flight. It seemed a worrying development, not unlike the nine-month pause that followed shortly after first flight of the Bombardier CRJ-1000 regional jet in 2009, as Embraer’s rival worked to resolve a software problem with the fly-by-wire-controlled rudder.

The KC-390 is packed with new technologies, including an advanced fly-by-wire system with active sidestick controllers and Embraer’s first exposure to a cargo ramp door and an in-flight refuelling system. As the wait for the KC-390’s flight-test campaign to resume continued, there were questions. Had Embraer over-extended itself with the largest and most complex aircraft development programme in Brazilian history?

One year later, the answer to those questions is clear. The flight-test pause is now understood as the result of a fiscal crisis within the Brazilian government, which is funding the $1.8 billion development programme. Amid a continuing economic recession, the air force was so strapped for cash that had fallen more than $270 million in arrears in payments to Embraer for the KC-390 development programme as of last August. 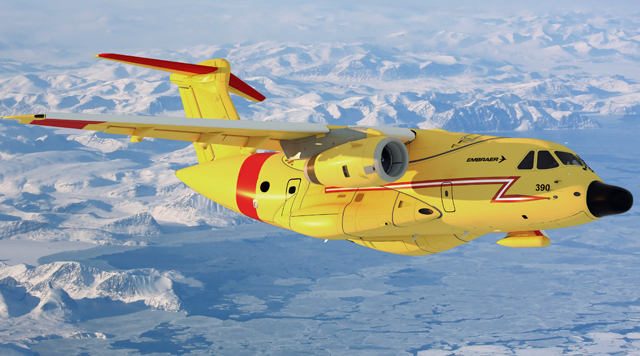 An agreement signed between Embraer and the air force that month established a schedule for the air force to catch up on payments over the next three years, allowing the KC-390 flight-test campaign to be reactivated.

Embraer resumed flight tests of the KC-390 on 26 October after the eight-month hiatus. The budget-imposed delay had forced the airframer to postpone the operational debut of the tanker-transport by a year to 2018. It seemed possible at first flight last February that the KC-390 could make a regional debut appearance at the FIDAE air show this year, but that was ruled out when the flight-test campaign paused over funding pressures.

But the KC-390 could still make a public debut later this year – perhaps even at the Farnborough air show in July.

“We are saving the surprise for later on this year, let’s say,” an Embraer spokesman says.

Keeping Embraer’s flight-test programme on track to complete civil airworthiness certification by the end of this year requires a high reliability rate for the relatively small test fleet. When the programme was launched in 2009, the Brazilian air force approved funding for only two prototypes for flight. At most, that is half the usual number. Embraer’s self-funded $1.7 billion development programme for the re-engined and re-winged E190-E2 regional jet, for example, envisions four prototypes for flight test.

Between late-October and the end of February, the first and only prototype in the flight-test programme has completed well over 100 flight test hours, says Paulo Gastão Silva, Embraer’s vice-president managing the KC-390 programme.

“We had a very good beginning of campaign. The aircraft is behaving very well. We have a very high availability so you see the number of flying hours for our first prototype. It’s really a very positive signal. We were able to enter in this period to fully cover the flying envelope, so Mach number envelope, we flew altitude envelope, we’ve flown all the flaps and slats combinations, gear up and down, in-flight shutdown and restart of the engines, the [auxiliary power unit], flight controls. So, a very, very positive beginning of [the] test campaign,” Gastão says.

The KC-390 had just undergone the flight-test phase when the pilot intentionally stalls the aircraft. Modern aircraft are designed to enter a stall smoothly and recover quickly. Few areas of aircraft performance are modelled as thoroughly in the design phase, but actual behaviour can only be confirmed by flight tests. So far, the KC-390 is “behaving pretty much as forecast with our models”, Gastão says.

If the models accurately predicted stall performance, it is a good sign that less extreme areas of the flight envelope will also comply with predicted behaviour, he adds.

Embraer designed the KC-390’s control software with three levels of such flight envelope protections. In direct law, the fly-by-wire system is activated but the protections are turned off. This degraded state is used operationally only if normal protections are not functioning correctly. The first level of normal law imposes a set of soft limits on pitch and roll angle and speed, but the pilot can override the limits if necessary. A second level of normal law places hard limits that the pilot can never exceed.

So far, the KC-390 test aircraft has been flown in direct law and the first level of normal law, Gastão says. “The fly-by-wire is behaving really well. The pilots are loving flying the aircraft,” he adds. “We’ll have the full normal mode flying very soon with the full set of functions for the flying envelope protections.”

Along with the Gulfstream G600 large-cabin business jet and the Bell 525 Relentless helicopter, the KC-390 is among the first aircraft to feature active control sidesticks. These inceptors for the flight control system address a common criticism of fly-by-wire technology by providing artificial feedback to the pilots. If the pilot commands a low-g turn, for example, the control stick is harder to push, replicating the feel of an aircraft using cables and rods to move the control surfaces. The active sidesticks are also electronically coupled, so an input by the co-pilot also moves the pilot’s controller at the same rate.

In most flight-test programmes, multiple aircraft are each assigned a specific role, with one dedicated mostly to validating the flight envelope, another to evaluate the avionics, a third for operations in extreme temperatures and altitudes and finally another for interior systems. With only two flight-test vehicles in the programme, Embraer must emphasise flexibility. Each aircraft must be instrumented to perform all of the many tests required for certification, so both aircraft are interchangeable if one is down for maintenance or upgrades.

The second flight-test vehicle remains in final assembly, but should join the first aircraft in flight shortly, Gastão says.

“In the first half of this year we will have both flight-test aircraft flying,” he says. “Both aircraft are configured so they can be used extensively for each of the tests. We do have a specialised aircraft in some parts of the campaign but this more a matter of internal planning.” 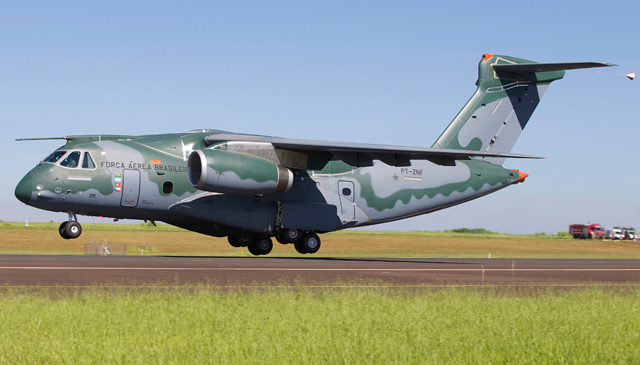 With the operational debut of the KC-390 still two years away, Embraer’s sales effort in international markets is becoming more aggressive. The Brazilian air force has signed a contract to buy 28 of the type. Embraer has also signed up commitments to buy another 32 aircraft from five international partners, including two from the Chilean air force.

Most recently, Embraer has entered the competition to replace the DHC-5 Buffalo for Canada’s fixed-wing search and rescue fleet. The release of the tender in December 2015 appeared to cast doubt on whether the sealed requirements are favourable to an aircraft larger than the Alenia C-27 or CASA C-295. Indeed, Lockheed Martin removed the C-130J, a turboprop-powered equivalent of the KC-390, from the competition after reviewing the bidding terms. But Embraer has decided to participate in the potentially year-long competitive phase, pitting the twin-jet KC-390 against the much smaller C-27J and C-295.

“We delivered our proposal at the beginning of January,” Gastão says. “This was in fact a very good example of taking advantage of a truly multimission aircraft. The need in Canada is specifically for a search-and-rescue mission. The KC-390 has a search-and rescue capability. It was one of the initial requirements from the onset. So we were able to respond very positively to the Canadian needs because we had the aircraft in general ready to do that.”

Gastão adds that the KC-390 will need “some” modifications to comply with the Canadian requirements, but the overall aircraft is still compatible with the core mission. The Canadian government has not released a timeline for the review process and a downselect date.

“We do expect they will announce their decision by the beginning of next year,” Gastão says. “So this is roughly the timeframe we have considered.”