The Finnish air force has launched a five-year process to select a new fighter to replace 61 active Boeing F/A-18C/Ds acquired in the 1990s.

Defence minister Jussi Niinistö authorised the air force on 20 October to begin the selection process for the HX fighter project.

The 64-page assessment recommends that the air force send requests for information to the potential bidders in February 2016, with responses due next October.

Cost and low-observability have been an early focus of inquiry for the HX fighter project.

A report on lifecycle costs for current and future fighter capabilities was completed by a defence ministry working group last April. Another project analysing the utility of low observable – or stealth – technology now and in the future is due to conclude by the end of the year.

The ministry’s working group has recommended that the current F/A-18C/D fleet be retired as scheduled between 2025 and 2030. The cost of a service life-extension programme is considered risky and prohibitive, as is the prospect of becoming the sole operator of C/D-model Hornet’s existing mission computer after 2021. 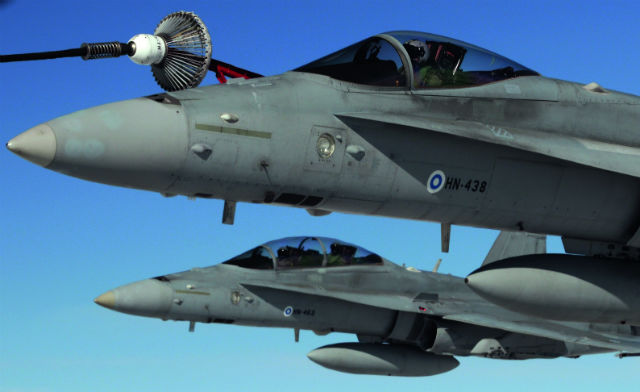 US Air Forces in Europe

The acquisition cost of the new fighter fleet is not possible within the defence ministry’s normal funding allotment, according to Niinistö’s statement. The Finnish parliament must decide how to finance the project under the legislature’s budget authority.