Lockheed Martin’s first F-35 Joint Strike Fighter is pictured after painting ahead of its formal roll-out and naming late last week in Fort Worth, Texas. Aircraft AA-1, an F-35A conventional take-off and landing (CTOL) variant of the JSF, is expected to fly by late October. As a result of a redesign to reduce the weight of the F-35B short take-off and vertical landing (STOVL) variant, AA-1 is a one-off and not fully representive of the production JSF. It is being used to validate design, manufacturing, assembly and test processes for the 14 development flight-test aircraft that will follow, beginning in February 2008. 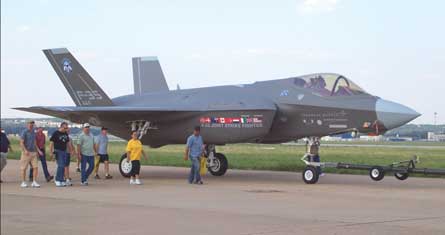